Dateline: Maui – island-to-island in the winter 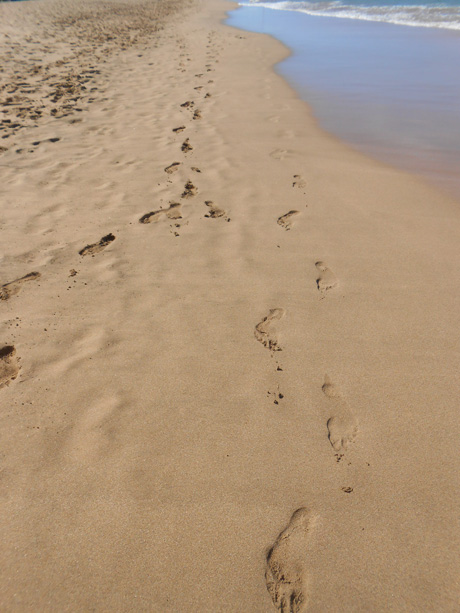 We left nothing but footprints in the warm Maui sand….

As luck, fortune, and timing sometimes provide, Josie & I got to spend a couple of weeks on Maui last month, and it was fun to compare their island with ours, and, even there, to connect with island friends from here.

Here’s a bit about what happened, and some observations about differences between them & us:

The occasion of our making the trip was to attend a whale conference (Whale Tales it’s called, put on by Whale Trust from Maui – here are photos of the event), Josie’s 50th birthday, and to just take a vacation (we remember our last one in 2008 fondly).

So, we spent a lot of time in the sand, walking ’round Lahaina, checking out history stuff so we could report to Kevin at the Historical Museum how Hawaii does it, whale watching, listening to music & watching traditional dance, and reading a bunch. 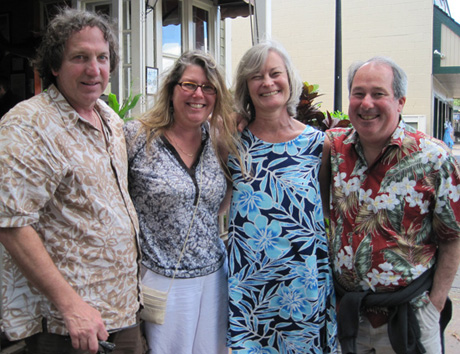 We weren’t the only ones – islanders Jon & Donna Tegnell (left) met us for her birthday as well, the morning before they headed back to San Juan Island…)

There are some ways how people in Lahaina do things, compared to us:

I got to sing a few at “Cheesebuger in Paradise,” looking over the ocean with warm breezes…..

•  Almost every eating place had live music – it was cool to see & hear so many folks singing in the cafés at night. Not all Jimmy Buffet songs, either – wide range of work.

• They have traffic lights (unlike us) but not that many. Slow moving traffic through Front Street there, as people in cars waiting for people on foot (us) to cross the street. 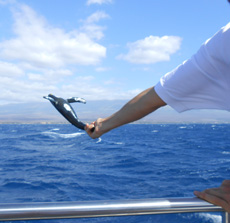 On one trip we took, the crew said they had “guaranteed whales” & let us take a picture of it…..

• Wonderful stuff in the galleries along Front Street there, with sales folks who are tons more aggressive than our town gallery sales people – “So, which piece would fit in your living room?” and “Which of our pieces is going home with you today?”

Gotta say I prefer the Friday Harbor laid-back way, but it was easy to appreciate the Maui determination, too…..

• It’s cool the way folks there all say “Aloha!” to greet or say goodbye to you, and “Mahalo!” to say thank you….kind of reminds me of the Lopez wave, because visitors can do it & feel a bit of belonging.

It would be cool if we could come up with some similar San Juan Island greetings, like maybe “May island winds blow you gently ashore,” or maybe “May the memory of the island summer sun warm you, all winter long,” or “Wow, how late was your ferry?” or something, as a greeting, and maybe “Rock on!” as a goodbye (since we live on a rock…..)

Probably need to put some thought into that one.

• There are some whale watch operators who say “guaranteed whales” as part of their advertising – easy enough, since you can see the humpbacks breeching when you’re standing on the dock. 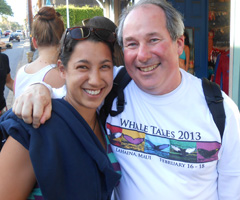 It was fun to run into former FHHS soccer player & all-time great kid Kelsey Peterman (graduated in the early 2000s) on Front Street…..

• We loved the way the history (and the spirit of the ancient Hawaiians) is woven into just about anywhere you walk….and shared so easily, in a way that invites visitors into exploring & sharing the way it used to be….

• It was cool to know other islanders were around – France & Chance Earle were there when we there, and Neil & Val Curtis & the kids, and people who were yelling, “Ian!” just like on Spring Street, except usually it was about someone else, or some misbehaving kid….

There was someone who hollered “Ian!” and waved at me as they passed by in a car, but I didn’t catch who it was – let me know if it was you, hey? 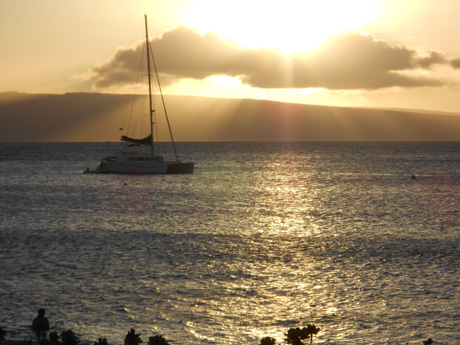 Sunsets every night (Lahaina faces west….) were an ongoing reminder of a warm evening ahead of music & friends & night walks….

Overall, I gotta say I became a fan – I’d never been to Hawaii before & it was a great chance to sit still & relax & get fired up for the things ahead this year….I can see why people love it! 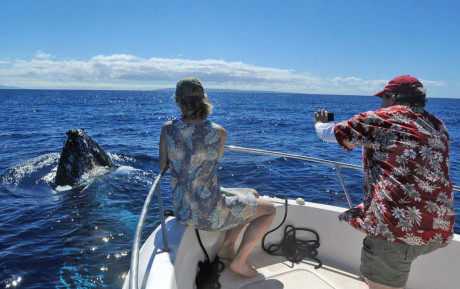 We got a chance to go out in a research boat, and a humpback spyhopped at one end of the boat (we sat still in the water, you bet), showed her belly as she passed maybe a meter or two under the boat, then spyhopped n front of the boat to say hey to Josie, their biggest fan. Photo by Jim Darling (thanks, Jim!) – click on the picture to see a bigger one!

If you like, here’s a little video I made of our humpback sightings, made over four trips out on the water.

Thanks for letting me share this with you! Cheers, Ian