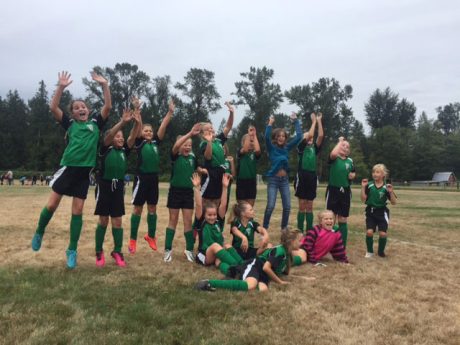 FHFC has some exciting news. This weekend 5 of our of traveling teams will compete in the Skagit Valley Youth Soccer Association (SKVYSA) soccer playoffs and championships. Our traveling teams compete against teams from Mt. Vernon, Anacortes, Burlington, Sedro-Woolley and Conway.

This year our players and coaches have done very well. On the girls side, our U11 team coached by Bryan Leighton, U14 team coached by Randy Martin & Ed Tucker and U12 team coached by Scott Zehner & Missy Martin have all made the playoffs finishing their season in second and third place in the standings.

Our boys teams have done just as well with our both of our boys U14 teams, coached by Sean Parsons & Floyd Bourne and Tito Bayas & Humberto Jimenez, finishing in 3rd and 1st place in their league standings.

All playoff and championship games will be held at Skagit River Park in Burlington. Please see the schedule below.

The FHFC board would like to encourage the community to come on out to Skagit River Park and support these players and coaches! Winners from the first round of playoff games listed below will advance to the championship game. Teams that do not win the first playoff game will proceed to compete for 3rd or 4th place. Both of these games will be played at 3pm.

We wish all of our teams and coaches good luck. Play hard and have fun – Go FHFC!