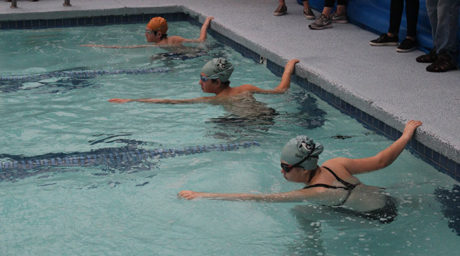 San Juan Island’s Orcas Swim Team hosted a group of swimmers from the Thunderbird Aquatic Team of Anacortes on Saturday, Feb. 16 during the home club’s last meet of the season. More than 50 swimmers, ranging in ages from 6-13, participated in the event.

“The primary purpose [of the meet] was to give the kids some exposure and experience swimming against others clubs,” said Tim Collins, the Orcas Swim Team head coach of seven years.

The local club hosts “friendly meets,” as Collins calls them, and scores are not kept.

“The main thing we focus on is swimmers achieving their personal best times,” he said.

Athletes in the meet could swim 50 yards in three of the following races: the butterfly, backstroke, breaststroke or freestyle. Those 10 and older could also compete in one of two additional races: 100 yards in the freestyle or a medley of the four strokes for 50 yards each. Collins said about four swimmers opted to race in the maximum of four events.

The Orcas faced swimmers from the Skagit Valley Family YMCA in December and held a home practice in January when the Whatcom County team couldn’t make it to a San Juan meet.

To Collins, the season was a success “due to the large turnout of new swimmers on the team and the support from the community,” he said.

The Orcas Swim Team is divided into three groups, from beginners to advanced, which are based on both swimmers’ ages and skill level, and named after the pods that the local Southern resident orcas live in: J, K and L. Swimmers practice and compete at San Juan Island Fitness, located on Argyle Avenue, and the other team coaches are Carleen Balcomb-Bartok, Claire Wright and Susan Williamson.

Unlike most swim clubs, the island’s team is not affiliated with a nationally recognized program. This causes difficulties when locating local clubs to compete against, as the meets will not be included in the other teams’ official scores. Next year, Collins said the Orcas Swim Team will look into making the club an affiliate of USA Swimming, which would not require a year-round program, but could guarantee more meets during the season.

Regardless of whether the club joins the national organization, year-round swim lessons — both private and group — are offered at San Juan Island Fitness. To join the swim club or start lessons, call 360-378-4449.