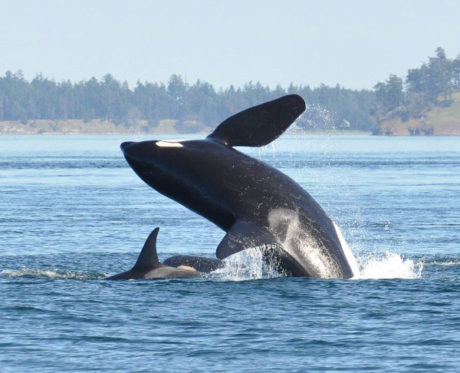 The Legislature has now passed all four major bills that, as a package, address several needs facing southern resident orcas recovery and survival. This package represents recommendations put forward by Governor Inslee’s Orca Recovery Task Force last November that brought together experts and advocates from across the state to find solutions to save resident orcas and restore Salish Sea.

“What we do to the orcas we do to ourselves,” said Suquamish Tribe Chairman Leonard Forsman. “Puget Sound helps support a billion-dollar fishing industry and the thousands who rely on healthy fish runs for food every day. Millions of people work and play on the Sound’s shores, and they, too, deserve a healthy, vibrant place to live. By addressing systemic and immediate problems, we can help recover our resident orca population and restore the waters we all share.”

“We have to address all the threats facing orcas both immediate ones like not being able to find food and looming threats like a catastrophic oil spill in the Salish Sea,” said Joan Crooks CEO of Washington Conservation Voters. “By passing this full package of bills, new environmental champions and longtime leaders in Olympia are proving that who we elect matters.”

“These bills are going to make a real difference for our endangered orcas, and also for all of the other animals and communities that rely on a healthy Salish Sea,” said Bob Davidson, President and CEO of the Seattle Aquarium.

“This is a huge victory for the health of salmon, orcas, and people,” said Laurie Valeriano, Executive Director of Toxic-Free Future. “The House stood up to tremendous pressure from the chemical industry and moved forward with bold action that tackles toxic pollution threatening salmon, orcas and people,” she added. “We urge the Senate to concur and send the bill to the Governor’s desk.”

“Shortly after Governor Inslee put out his call to action for orcas last year we watched a grief stricken mother carry her dead calf for 17 days, with her family mourning beside her – a stark reminder of all that we stand to lose with a population that is now the lowest in decades,” said Amy Carey, Executive Director of Sound Action. “This week, the legislature showed true leadership to save our orcas and restore Puget Sound. We need all four of the legislature’s orca recovery bills to pass but this is critical step forward to increase the availability of chinook salmon statewide by protecting habitat for forage fish and salmon that will benefit our beloved orcas.”

“Everyone who relies on our shared waters should be celebrating today,” said Mindy Roberts Puget Sound Program Director for Washington Environmental Council. “Quieting waterways and limiting vessel disturbance to orcas will have an immediate effect to help them find the food they need. This as an incredible step to recover our orcas and restore the Salish Sea.”

“Southern Resident killer whale protection and recovery has been a priority since we co-petitioned for federal listing in 2001. We are grateful for Governor’s Inslee’s leadership in establishing the Task Force and requesting many of these bills, and for the work of Rep. Lekanoff.”– Stephanie Buffum, Executive Director, Friends of the San Juans.

“Friends of the Earth thanks the WA Legislature for requiring barges to be escorted safely by tugs because it doesn’t take a supertanker to create an oil spill big enough to render our orca extinct.” –Marcie Keever, Oceans & Vessels Program Director

“HB1578 is a strong step forward in the fight to protect the Salish Sea and our Southern Resident orcas from the risks posed by oil spills. A single spill could wipe out the Southern Resident orca population. We urge Governor Inslee and the legislature to continue fighting for additional safeguards against the risks posed by oil transportation in our region.”  –Alyssa Barton of Puget Soundkeeper Alliance