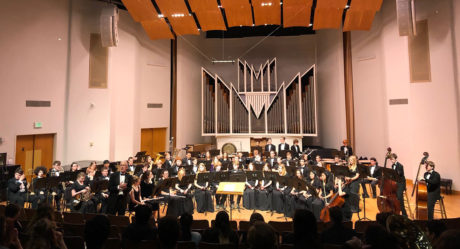 Sixty high school students from the school’s Jazz band, the “Zero hour” band, and the Concert band classes traveled to Bellingham for one of the two days of the festival. This annual regional festival includes schools from Mount Vernon to the Canadian border.

The San Juan Music Educators Association is located in the Northwest Puget Sound region. According to their website, “Music is an important part to the students in and out of our classrooms, and we advocate for support of music in our schools.”

There were close to 30 Bands that participated. A superior rating is the highest rating bestowed upon a band for performance.

Cart Nelsen, FHHS Band Director, exclaimed “It was a full and busy day, listening to several groups, even an all-girl Soshin School from Yokohama, Japan. Our students’ effort was outstanding. It was a great day!”