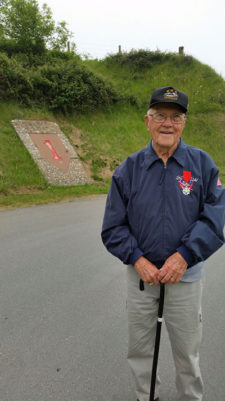 In the San Juan Update mailbag today, we have this very special note from Cheri Hancock…

My father, Bert Chandler, is one of the last remaining American D-Day heroes. He was in the first wave of boats to hit Omaha Beach on June 6, 1944. (Army, 1st Division AKA the “Big Red One”, 16th Regiment).

Dad is one of the last survivors who actually came ashore on D-Day. He proceeded to fight through France and was wounded in the Battle of the Bulge. He was awarded the Purple Heart along with other medals for his service. In 2016 he also received the French Legion of Honor.

This year, for the 75th anniversary of D-Day, my dad and I are returning to Normandy where he will be an honored guest at several events. He will return to Friday Harbor with me on June 11 and stay through Father’s Day. My dad is 97.

I just thought I’d let you know in case you think this would be of interest to our fellow islanders.

Thank you for your service Bert. And thanks also to all those who made the ultimate sacrifice for their country.