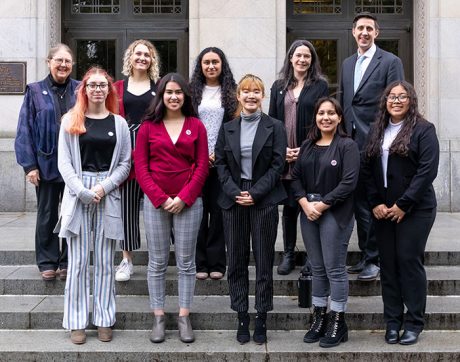 Do you know what a tardigrade is? If not, it’s time to find out! It could soon become Washington State’s official micro-animal thanks to a partnership between students at Friday Harbor High School, Riverday School in Spokane, Jefferson Middle School in Olympia, along with Lynn Bahrych from the San Juan Islands Conservation District, and Katie Fleming from Friends of the San Juans.

The tardigrade, also known as the water bear or moss piglet, is a microscopic animal that lives in virtually every habitat on Earth and can be found in every county in Washington. Tardigrades live in lichens and moss, as well as in marine and freshwater sediments, soil, sea water, fresh water, glaciers, hot springs, deserts, and rain forests. Tardigrades typically range in length from 0.3 to 0.5 millimeters, though some species may exceed one millimeter. They are a key component of healthy soil.

Many species of tardigrades have been identified in fossil records dating back 530 million years, and have survived the past five mass extinctions on Earth. Tardigrades have been studied for methods to adapt to climate change and withstand radiation damage from cancer treatment due to their ability to survive in extreme conditions.

The Friday Harbor High School Eco Club learned about tardigrades in their AP Environmental Science class, and were so fascinated that they took their interest to Olympia to help give these tiny, but important, creatures more exposure. They supported Representative Alex Ramel, the 40th district’s newly appointed state representative and the bill’s lead sponsor, and testified in front of the House Committee on State Government and Tribal Relations to make the tardigrade the Washington State micro-animal. The bill, HB 2747, has now passed out of the Executive Committee and is on its way to the house floor for a vote before going to the senate.

“One of the coolest things about this job is when young people come to the capital to talk with us, their excitement and enthusiasm is contagious,” said Representative Alex Ramel from Washington’s 40th district.

“My favorite parts of the trip were being able to witness the democratic process in action and meeting with our representatives,” said Ayla Ridwan, a junior at Friday Harbor High.

In addition to testifying for the tardigrade, the students met with Representative Debra Lekanoff to discuss waste reduction, marine plastics, and climate change. They also spent time in Senator Liz Lovelett’s office talking about the low carbon fuel standards legislation, which is a priority climate action bill.

“It was inspiring to see the students grow during the time we spent in Olympia. We’re so fortunate to have these young leaders out there taking action every day to protect our environment and bring awareness to important issues,” said Katie Fleming, Community Engagement Director at Friends of the San Juans.