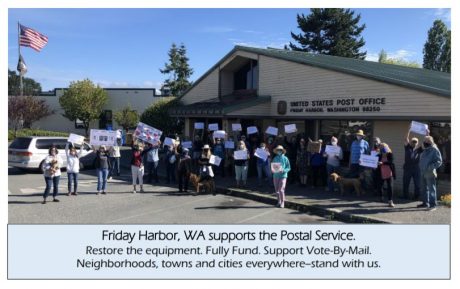 “This morning, Sunday, August 23rd, 2020, Friday Harbor residents turned out to show support for funding for the USPS, and to protest any attempt by the Trump administration to rig the 2020 elections through mail and election tampering.
Yesterday the House of Representatives passed legislation to provide $25 billion in funding ahead of an expected surge in mail-in ballots in November. Twenty-four Republicans crossed the aisle to vote with Democrats in a 257-150 vote, illustrating bi-partisan support for the USPS.
Mitch McConnell has stated publicly that the legislation won’t pass in the Senate. However the House vote proves that Senate Republicans are vulnerable on this issue, and that public pressure could swing the vote to protect both the USPS and the elections.
Send this image and message to your friends, family and fb friends, and encourage them to make their own photos to post and send. Forward it to your elected representatives and those Senators in swing states so that they feel the heat now when it counts. We can do this.”
Link to: Rally On Shaw For The United States Post Office