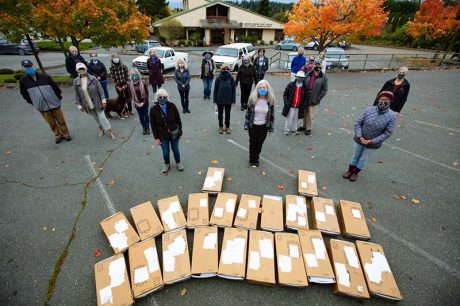 On Friday, Oct. 16, a group of San Juan Island volunteers mailed approximately 12,000 letters to intermittent voters in key battleground states, asking them to please vote in this election.

The effort was made in collaboration with the nonprofit organization Vote Forward, and spear-headed by San Juan Island resident Beth Larson.

Beth distributed letters from Vote Forward to approximately 31 people, who wrote the 12,000 letters. The letters include space to write a personal note on why the writer votes in every election.

Vote Forward’s goal is to empower volunteers to encourage voting in every election. The letters do not promote a specific candidate or political party. They target intermittent voters; and their research shows that voters who received a letter were more likely to vote.

The San Juan Island letter-writing effort grew out of a group of friends getting together to write postcards to legislators after the 2016 election. Every week they met in Becky Kilpatrick’s art studio. In 2018, the group started writing letters for Vote Forward.

The San Juan Island group has encouraged voting in state, national and local elections since the 2018 election. They have also encouraged thousands of people to register to vote across the country.

Throughout 2020 the group has been writing letters for the Nov. 3 election. At first, the group met in person, weekly, but after the pandemic began, letter-writing continued individually from home. Beth emailed each volunteer 20 or more letters at a time, week after week.

“I had to do something to make a difference. There is just too much at stake for any of us to be silent,” said Jane Wentworth, one of the letter writers.