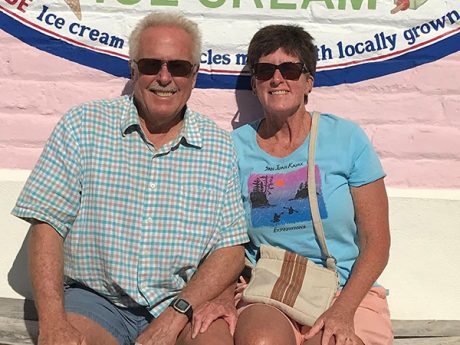 After 40 years of operating San Juan Kayak Expeditions and 33 years of guiding multi-day trips, Tim Thomsen has sold the business to Todd Starnes, owner of Washington-based adventure companies Bicycle Adventures, Evergreen Escapes and Sacred Rides.  Cole Wilson, a long-time guide with the company, has been hired as the operations manager here in Friday Harbor. (Cole is no relation to other Wilsons on the island.)

Tim founded the business in 1980, the original islands’ sea kayak outfitter. He spent 33 years personally guiding three- and four-day trips in the San Juan Islands, and 13 years guiding seven- and 10-day trips in the Sea of Cortez. He married Sally Kerr in 2007. She continued as Island Rec director at that time, joining him in the kayak expedition business in 2015.

Sally Thomsen said, “We are confident that our past guests will continue to enjoy the quality of service they expect from San Juan Kayak Expeditions under Todd’s leadership and long-time employees of our business.”

Tim said, “Todd’s experience and knowledge of adventure travel with a focus on non-motorized activities were especially appealing to us.”

And Todd said, “This is a perfect fit. Tim and Sally are fantastic to work with.”

Bicycle Adventures has been operating tours in the San Juan Islands for 36 years and every tour takes a break from the bike to enjoy a day of paddling.

Sally was the first full-time director of Island Rec from 2000 to 2015. She was preceded in the position by Cindi Baker as part-time director. She initiated a great many of the key programs that are still going strong and are now part of the community fabric, including Music on the Lawn, the teen Halloween party, Community New Year’s Eve, the Father-Daughter Dance, and many others. Island Rec under her leadership took over the annual 8.8 race during the County Fair from the Journal, which had in turn taken it over from the former Island Record, and which was started in 1978 by the late Joyce Sobel.

With her guidance, Island Rec also took over management of several island parks, most recently the John O. Linde Community Park. She left before it officially opened but was there for working out the agreement with the anonymous donor, the school district and the Friday Harbor Athletic Association.

Sally and Tim expect to continue living on San Juan Island “as long as life allows,” while spending much of the winter in Baja California.