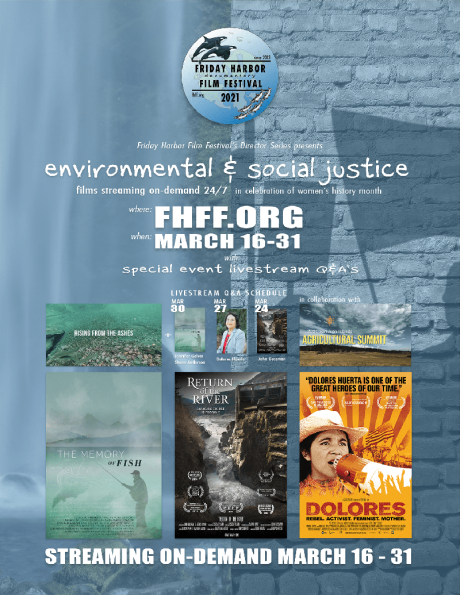 Friday Harbor Film Festival’s Director Series presents four online films: “The Return of the River”and “The Memory of Fish” from March 16 to 31, and “Dolores,” in collaborations with the WSU San Juan Islands Agricultural Summit, from March 20 to 27 at fhff.org.

Screen each film for only $2.95.  A new short film, “Rising from the Ashes,” will be available free.  These documentaries offer viewers hope for environmental justice and social change. Directors will be hosting livestream Q&As. Check the website for details.

“Return of the River” (co-directed by Jessica Plum and John Gussman) follows a group of strong-minded, committed people as they attempt to change the public opinion of a town, and eventually the entire country, to remove both dams on the Elwha River in Washington State. The film tells the story of the largest dam removal and river restoration project in history. It explores an extraordinary community effort to set the river free and documents an unlikely victory for environmental justice.

The camera soars over mountain headwaters, dives into schools of salmon, and captures turbines grinding to a halt as the project takes shape. “Return of the River” features people and perspectives on all sides of the Elwha debate, reflecting the many voices of the adjacent valley. The community comes to a consensus, setting the Elwha River free and showing the way to a more sustainable future.

“The Memory of Fish” was co-directed by Sachi Cunningham and Jennifer Galvin. The salmon of Washington’s Elwha River sustained Dick Goin for the first half of his life.  He and his family had been nourished by these salmon since migrating to the Olympic Peninsula during the Dust Bowl.

But since 1913, when a dam without any fish passages was constructed across the river, the salmon population had declined to less than 90% of its former size.  Goin never forgot his debt to the salmon and spent the last half of his life fighting to bring these fish back to the river.  A pulp mill worker and master fisherman by trade, he drew on his memories and persistence to battle for the biggest dam removal project in U.S. history. “The Memory of Fish” paints a documentary portrait of the heroism of one man with a mission: to bring the salmon home.

“Dolores” was directed by Peter Bratt. Dolores Huerta is among the most important, yet least known, activists in American history. An equal partner in co-founding the first farm workers unions with Cesar Chavez, her enormous contributions have gone largely unrecognized.

Dolores tirelessly led the fight for racial and labor justice alongside Chavez, becoming one of the most defiant feminists of the twentieth century—and she continues the fight to this day, at 87. With intimate and unprecedented access to this intensely private mother to eleven, the film reveals the raw, personal stakes involved in committing one’s life to social change.

“Rising from the Ashes” was directed by Shane Anderson. Less than six years ago, the second of two dams on the Elwha River, on Washington’s Olympic Peninsula, was taken out to provide access for fish to the upper river located in the Olympic National Park. Since then, we have witnessed a remarkable transformation of the river – and of the wildlife that depends on it.

In celebration of International Women’s Month, Dolores Huerta will participate in a free livestream Q&A at 3 p.m. Saturday, March 27. Join online at fhff.org.  It will be recorded to enable those who can’t participate to watch free online. Further information about her is available at the Dolores Huerta Foundation and at Dolores Huerta Social Justice Network.