Island Senior: Talking About My Generation 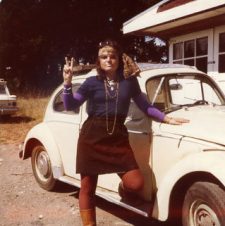 “Island Senior” is a regular column on the San Juan Update written by Peggy Sue McRae.

When I refer to myself as a hippy, I am not bragging. It is aspirational. To this day I aspire to live up to the promise of my love beads and peace signs.

That is why it caught my attention that among May’s History Month activities there was a panel hosted by Orcas Island’s Genealogy Club called “Back in the Day” celebrating Orcas past with a focus on the 1970s – 1990s including the “back to the land” movement and hippies.

My parents were of the “Greatest Generation” and like so many people their age after WWII they left the small towns and farms of America, in their case San Juan Island, seeking opportunities in the cities.

Thanks to my family, I claim pioneer status on the island but I grew up in the suburbs of Seattle. Technically, I’m a baby boomer, but I also belong to a sub-set of the “boomer” generation, I belong to what I call the “Woodstock Generation“. Described in song by Joni Mitchell, “We are stardust. We are golden. And we’ve got to get ourselves back to the garden.”

While my family has old island roots, I myself came in on that wave of young people arriving in the islands in the 1970s. Those were the days when a pod of hippies could rent an old farmhouse for not very much money and between potlucks and beach parties, many of us made sincere attempts to get back to the land.

There must have been some friction between older more conservative islanders and my hippy cohort but I don’t remember it.

I do remember entering banana bread in the County Fair and the lady who signed me in telling me how glad she was to see more young people getting involved. I remember an old apple press being restored and brought back into use. There are families here who have farmed for generations but island agriculture had been in decline after the war and I think we really did breathe some liveliness into the island’s farmland character.

Looking around today at our thriving farmers market, our active Grange, and our beautiful Food Co-op, I know we cannot take full credit but we did lean hard in that direction. Our influence can be seen not just in a revival of agriculture but also in the arts and crafts that are so prolific on the island.

If you are as old as I am, and you are not already a member, it’s time to consider becoming a member of the Mullis Center. Support essential programs for seniors and take advantage of the many perks. Membership is $25/individual annually (waived with no questions asked for those who can’t afford it).