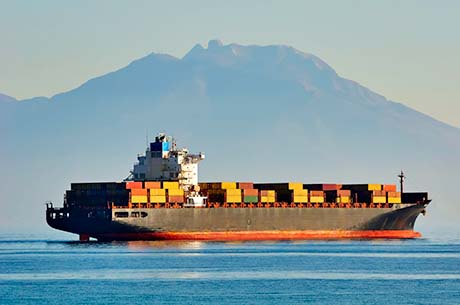 San Juan County, WA, USA. – The recently updated Salish Sea Vessel Traffic Projections (PDF – Nov. 2021) provided by Friends of the San Juans shows that at least a 25% increase in large, ocean-going commercial vessel traffic could occur if all of the proposed new and expanding terminal and refinery projects are permitted and constructed, as compared with 2020.

Twelve of the 22 projects would add at least 2,634 annual vessel transits to and from Salish Sea ports in British Columbia. Canada’s Trans Mountain Pipeline Expansion project and the proposed new container ship terminal at Roberts Bank account for almost half of the projected increase in vessel traffic that has been quantified. 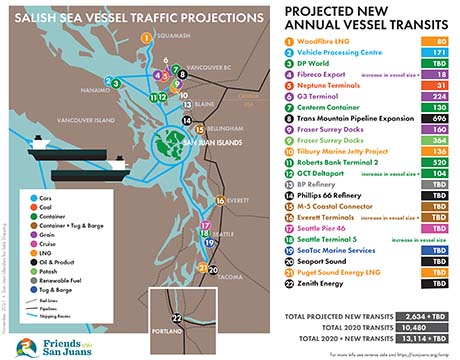 What is significant about this Salish Sea Vessel Traffic Projection is that the 25% increase does not include any of the ten new, expansion, or redevelopment projects in Washington state. Several of these projects will likely result in increased ocean-going vessel traffic but lack any review of the potential increased vessel traffic-related environmental impacts and lack any consideration of alternatives or mitigation measures.

Vessel traffic impacts the critically endangered Southern Resident killer whales by disrupting their foraging, affects their ability to communicate and capture scarce prey, and increases the risk of fatal ship strikes. Additional vessel traffic also increases the risk of accidents and oil spills. A major oil spill could cause the Southern Residents’ extinction and would impact the entire marine ecosystem and our environmental, cultural, and economic resources.

“It is unacceptable that these Washington-based projects are being permitted without assurances that any increased vessel traffic and associated impacts to the marine habitats and imperiled species will be addressed. This includes endangered Chinook salmon and Southern Resident killer whales,” said R. Brent Lyles, Friends of the San Juans’ Executive Director. “If our region and our state are serious about the long-term health of the Salish Sea, it’s obvious that permits must be conditioned to require any increased vessel traffic’s impacts to be addressed.”

Friends of the San Juans issued its first Salish Sea Vessel Traffic Projections in 2015 to provide the public and decision-makers with comprehensive information about projects throughout the Salish Sea that would increase large commercial ocean-going vessel traffic and associated cumulative impacts. The Salish Sea Vessel Traffic Projections infographic (PDF) illustrates the need for cumulative environmental impact analyses when vessel traffic increases result from new or expanding terminal and refinery projects. For more information go to sanjuans.org/ssvtp/.