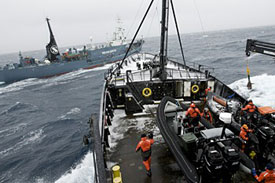 Taking on the whalers...

Based in Friday Harbor, Paul Watson & his outfit are getting some viewers on TV – here’s more from Traci at Sea Shepherd:

Whale Wars Season 2 Premier Wins Top Ranking in the US

Animal Planet ranked #1 among all cable with males aged 25-54 at the 9 PM and 10 PM hours respectively (excluding movies).

“Whale Wars is one of the most exciting series in the network’s history and a terrific launch for our summer season with ten more weeks of amazing storytelling for the show’s fans,” noted Marjorie Kaplan, president and general manager of Animal Planet.

Said Captain Paul Watson, “We know that Sea Shepherd’s passion and determination to save the great whales from illegal Japanese harpoons makes for compelling television and we’re glad to see this important environmental issue becoming a part of mainstream media.”