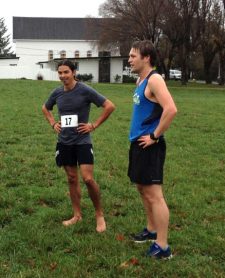 An awesome 81 participants turned out in pouring rain Thursday for this year’s Thanksgiving Turkey Trot – the 13th annual 5K race/run/walk/stroll. It began and ended between the Friday Harbor Suites and the Catholic Church property and went out to the end of Lampard Road and back. Besides the runners, there were walkers, many of them with babies in strollers or dogs on leashes. In addition to a small sum ($5 or $2 depending on age) participants were asked to bring two cans of food for the Food Bank.

Race organizer Paul Hopkins said he does this year after year because “it’s a fun way to help the community get an active start to a family holiday.” He added, “It’s become a Thanksgiving tradition for many.”

Paul wanted to thank his family, Sam, Hannah and Sammantha, who acted as race officials, and the Friday Harbor Suites for 13 years of hosting registration and the start, along with King’s Market which is helpful in many island events.

The first two runners to come in were Nick Roberts, right, and Zach Rowland, left, who ran the race barefoot. The first woman to cross the line was Robyn Roberts, Nick’s sister.