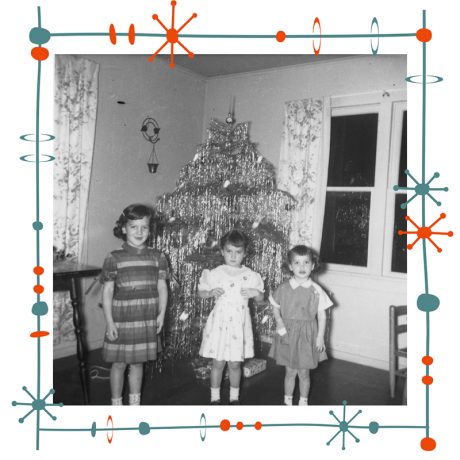 Not all of the photographs in the San Juan Historical Society and Museum collections are from the island’s pioneer days or the early days of Friday Harbor’s development as a town.

The snapshot above caught our eye as a classic Christmas image from the 1950s, tinseled tree and all. Posing in pretty dresses are three daughters of James and Elizabeth Sutterman.

On the back of the original photograph was handwritten this description (which may or may not be entirely correct, since we do not know who wrote it years ago):

Even though we don’t know if the year was actually 1954, it was still interesting to research what was going on in popular culture that year. Not in any particular order of importance, here are some things we learned.

The mother of the Sutterman girls, Elizabeth, was born on Lopez Island to Gerald and Mary Hammond. Elizabeth married James Sutterman, son of Emil Sutterman and Ione Smith. James spent his childhood at Roche Harbor, where his father was employed as a cooper for barrel production at the Roche Harbor Lime and Cement Company. Emil was born in Belgium, while Ione was from island families. Her parents were George W. Smith and Mary Esther “May” Chevalier.

There is a lot more that could be written about the extended family of the three girls in this month’s photo, since there are many cousin families here, but we offer it as an invitation to enjoy the holiday season and keep the museum in mind for sharing your island family’s photos and stories from the 1950s and later. Recent history is worth saving, too.

Merry Christmas and Happy Holidays to all!