Hey, bluebirds – good to have you back! 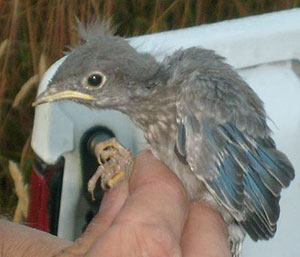 You already knew about the bluebird re-introduction project…here’s more from Kathleen at the Preservation Trust:

A “Welcome Back Bluebirds” nesting contest has been announced by the San Juan Islands Western Bluebird Reintroduction Project. The contest will acknowledge the first member of the island community to have a Western bluebird nest on their property (in a nest box or in a natural cavity). “We hope this contest will encourage islanders to notice and report nesting activity of the reintroduced bluebirds and their offspring,” said Kathleen Foley, Director of Education for the San Juan Preservation Trust. The winner of the contest will win a cedar bluebird nest box and a Western Bluebird Reintroduction Project hat.

2009 may be the best year ever for spotting a Western bluebird. After an amazingly successful year in 2008, in which over two dozen juvenile birds were hatched on San Juan Island, the likelihood of birds returning from their wintering grounds and nesting in the islands are quite good. Several sightings on San Juan and Orcas Islands have already been reported.

Look for these brightly-colored birds near fields and meadows, and in Garry oak habitat throughout the islands (for a complete identification guide, visit www.sjpt.org). Many of the birds will be wearing colored leg bands, making them distinguishable from other local songbirds. Sightings and nesting observations can be reported to Kathleen Foley of the San Juan Preservation Trust at 378-2461 or to Barb Jensen of San Juan Islands Audubon at 378-3068. A “bluebird hotline” number has also been established to report sightings: 360-298-2822.

The San Juan Islands Western Bluebird Reintroduction Project is a partnership of the San Juan Preservation Trust, the San Juan Islands Audubon Society, the American Bird Conservancy, and the Ecostudies Institute. The Project’s primary goal is to reestablish a breeding population of Western bluebirds, a native songbird that once bred in the San Juans but has been absent from the islands for more than 40 years.