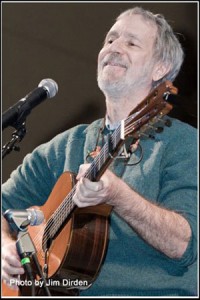 Jan from the Community Theatre reports:

If you liked TOM RUSH when he performed here last October, you’ll like Jesse! Just ask our own island music enthusiast, Kirk Fuhrmeister—guitarist and owner of Isle Be Jammin’ on Argyle Street. Kirk plays some of Jesse’s songs when he performs and is very excited to see Jesse live in Friday Harbor. Kirk says Jesse has a way of writing “story songs” that often portray the balancing acts of life, like his “Nothing but the Breeze: Life is much too short for some folks. For other folks it just drags on….” Jesse was one of the most prolific singer/songwriters of the ‘60s and ‘70s. His songs have been recorded by such artists as Elvis Costello, Emily Lou Harris and Bonnie Raitt. He has sung and played with the likes of Todd Rundgren, Tom Rush and Wynonna Judd. People magazine compared his voice and style to James Taylor.