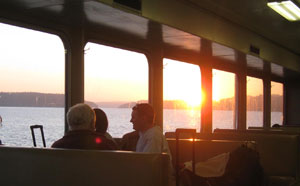 Sunset on the way we've been doing things...

That’s the word from County Council member Howie Rosenfeld yesterday, as he passed along this note from the Ferry Advisory folks (Rob DeGavre is the contact at 378-3605):

United States Coast Guard has ordered Washington State Ferries to discontinue the system by which WSF has traditionally crewed its boats. As a result, effective with the Fall Sailing Schedule, WSF will be required to change significantly the schedule of ferry service to the San Juan Islands.

Traditionally WSF has crewed its boats on the Anacortes-San Juan Islands-Sidney routes using what are called “touring watches”. Crews work two shifts totaling 16 hours with an on-board rest of typically 8 hours between the two shifts. The first shift is normally almost 10 hours. The crews then have the following day off.

Following complaints by some down sound, crew members that touring watches are stressful because of extended work hours and minimal sleep, the Coast Guard has determined that touring watches are unsafe. The Coast Guard’s determination significantly limits WSF’s scheduling flexibility. First, WSF will now be unable to moor a mainland ferry at Friday Harbor overnight. Secondly, in the absence of touring watches, crew shifts are limited to a maximum of 9 hours under the provisions of WSF’s labor agreements. WSF has been negotiating with its unions to extend the 9 hour limitation to 10 hours, but to date we understand the unions have declined to do so.

WSF has given our Ferry Advisory Committee (FAC) a draft Fall Sailing Schedule that conforms to the Coast Guard’s new requirements and to the 9-hour shift limitation. In the draft Schedule, the sailing times for nearly all mainland sailings to and from Orcas, Lopez, Shaw and Friday Harbor change. The impact, however, of the elimination of touring watches falls primarily on morning service from Friday Harbor to Anacortes and, we understand, on US Post Office deliveries to San Juan Island. The draft Schedule replaces the 8:05 am direct sailing from Friday Harbor to Anacortes with a shared 9:10 am sailing that stops at Lopez arriving in Anacortes at 10:35 am. This sailing is also likely to overload. The 11:10 am sailing has been replaced by a 12:35 pm sailing. Typically over 60% of the Friday Harbor traffic boards ferries to arrive in Anacortes prior to midday. The draft Schedule allocates only 26% of total eastbound capacity to these hours. The net effect will be to make it difficult for San Juan Island residents to make mid-morning appointments in Anacortes or conduct a full day’s business on the mainland.

The draft Schedule incorporates numerous inefficiencies in the use of WSF’s assets. Because all ferries now start the day in Anacortes, eastbound service is skewed towards the afternoon and evening while eastbound demand is concentrated in the morning. In addition, there is a waste of resources late in the day as the boats are returned to Anacortes to get in position for the next day.

Our FAC has continued to request changes to the draft Schedule from WSF. But given the provisions in WSF’s labor agreements, it is unlikely that WSF can in fact revise the draft Fall Schedule to restore service to current levels.

On Thursday June 11 WSF will be conducting g a meeting with our community on board the interisland ferry. We urge you to attend this meeting and voice your concerns. A copy of WSF’s draft Fall Schedule can be obtained from the County’s office; however, it is in a format that is not similar to WSF’s published schedules.