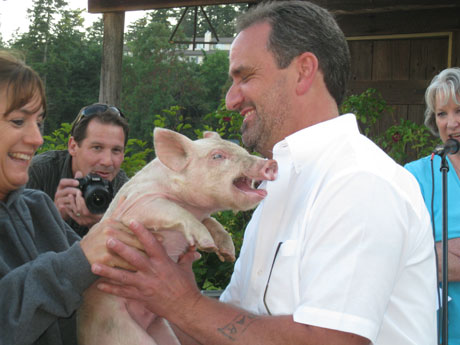 Dan & Leanne's pig get acquainted before he plants one on the pig....

It was all in good fun – folks could vote with their dollars, and Postmaster Dan Fleming won the top prize…the chance to kiss a pig. Leanne Grosjacques brought her favorite pig, Dan puckered up, and the deal was done.

Conducted at last night’s Music on the Lawn with Island Rec (wasn’t the music great?), it was all a fundraiser by the Soroptimists to make a buck for the Relay For Life this weekend, and when the votes were counted, $1700 had been raised.

It was announced as Kig Pissin’ early in the evening, but that didn’t fool anyone, especially the pig. 🙂