Styrofoam ban is overdue – let’s get it in place!

For the last twenty years it’s been a side interest of mine to see what a trashy species (that would be us) can do to clean up its act.

After hearing Charles Moore last year (Doris Estabrooks arranged for him to come explain how trash & styrofoam are choking the oceans), I was glad to hear that the Town Council & County Council are considering a styrofoam ban…it’s time to finish the “considering stage” and do it!

Here’s more from the anti-litter committee: 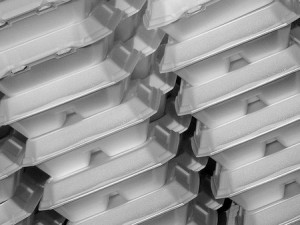 It’s been 13 years since the 1996 Solid Waste Management Plan was adopted by the County and Town. The Plan states that “Solid Waste staff will explore the possibility of a ban on polystyrene food packaging (Styrofoam) in the Town and County as allowed under RCW70.95C.100 and will prepare a recommendation for the Board of County Commissioners in 1997.”

This ban has been 13 years in the making.

Business, service group and individual members of the all volunteer “San Juan Island Anti-Litter Initiative” have drafted an ordinance to ban Styrofoam “take out” food containers from San Juan County.  The Town of Friday Harbor will hold a hearing on this ordinance on July 16 at 5:30 in the Town Council Chambers. San Juan County Council will discuss this issue on July 28 at 3:30 in the Council Legislative Building.

This Ordinance is the brain-child of Doris Estabrooks, 87, who has gathered over 1600 signatures for a ban since 2006. Estabrooks became concerned with impacts of Styrofoam on our health and the impacts to wildlife. Estabrooks appeared before the Town Council in 2007 requesting a ban on Styrofoam and the Council responded through the adoption of a Town of Friday Harbor Resolution banning Styrofoam from Town Hall and encouraging local businesses to voluntarily ban Styrofoam food containers, which was adopted in 2007. After a strong grass roots effort since then, many businesses still use Styrofoam as take-out containers.

A similar ban on Styrofoam has been realized in Portland, Oregon nearly 20 years ago. Since then, other cities such as Seattle and Berkeley have adopted similar bans.

The ordinance phases out all Styrofoam take out containers by April 22, 2010, giving businesses with foam inventory time to convert to alternatives.

Enforcement is just another line item on the regular restaurant inspections and would be done in partnership with the local Health Officer and Enforcement officer.  The incremental burden is small and costs nearly nothing.

Our state legislature established waste reduction as the first priority for the collection, handling, and management of solid waste; and found that it is “necessary to change manufacturing and purchasing practices and waste generation behaviors to reduce the amount of waste that becomes a governmental responsibility.” Our community has been waiting 13 years to clean up our waste stream.

Shouldn’t we comply with the existing recommendations from the Town of Friday Harbor and the San Juan County Council?