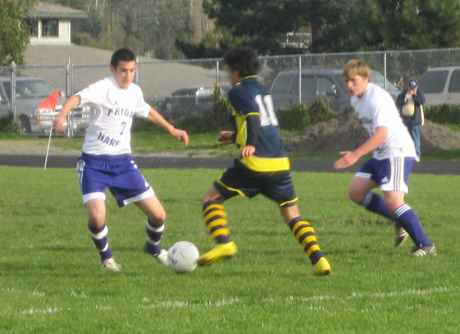 Matthew (left) and Stewart close down the Forks attack...

You know Forks – yep, that’s the place the “Twilight” movies were filmed…

Well, the Friday Harbor boys soccer team got to finally get their season underway with Forks Friday afternoon after their first three opponents postponed matches till later in the year…and they got off on the right foot for the first three quarters of the game.

The Wolverines found the passing lanes & completely controlled the first seven minutes of the game before the Spartans began to find the other end of the field. From then on it was an even game of back & forth for the half, with neither team getting great looks at the goal. Forks managed to sneak one in at 29 minutes to make it 1-0 at the half, but things felt manageable.

Six minutes into the second half, junior midfielder Nick Roberts bent a fifteen-yard blast into the corner of the net to tie things up for FHHS, but the Spartans jammed home three goals in the next fifteen minutes to win, 4-1.

Stars for the home team? It was more of a team effort than that, but seniors José and Oskar kept creating chances with freshman Brett, while junior defender Matthew & soph keeper Ben are communicating well on defense. (I’m using all first names, like they do in Brazil. It’s cool there – maybe it will catch on here.) 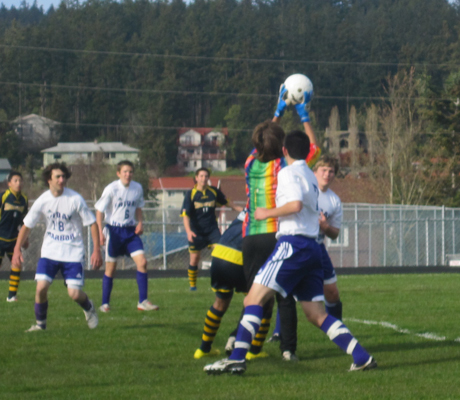 FHHS keeper Ben rises above the crowd to take the ball away from the Spartans on a corner kick.