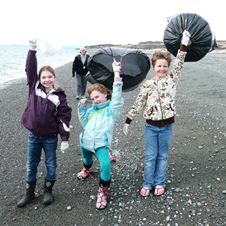 I love it that there are people like Stephanie (she works at Harrison House/Tucker House) who think up ideas like The Great Island Cleanup & then make them happen – it’s people like her who make this a great place to live! Thank you, Stephanie!

She filed this report about how it all turned out:

As I am finishing up the final documentation on the Great Island Clean-up, it occurred to me that you might like to hear some of the “trash tidbits” that didn’t get released.

You probably heard that we had over 200 volunteers who picked up over 5,000 pounds of litter on the island.  What people may not know is some of the interesting details on this litter.  For example,

All in all, we were heartened by the tremendous response by volunteers, and are pleased at how “light” the island looks without all the cans, bottles, papers, and plastics rolling around on the roads and beaches.  Now that we’ve gotten the island looking pristine again, we encourage ALL islanders to pick up litter when they see it.  It’s so much easier to just stop and pick up a can or two here and there, rather than trying to clear away mountains of litter.

Many of the volunteers have expressed an interest in making the Great Island Clean-Up a twice-a-year event, and some of the organizing committee is backs this idea as well.  If any of your readers are interested in participating in the organizational aspect of another clean-up, please contact me (Stephanie (at) tuckerhouse.com) and I’ll put you in touch with the rest of the group.  I personally will not be able to head a Great Island Clean-Up for Fall, because we’re heading into our busy season at the inns, and I will not have time to devote to a project of this magnitude.  However, I would love to see another volunteer pick up the banner and run with it, and I will give all the support and direction I can.

Lastly, Ian, I would like to once again thank all the volunteers and businesses who supported this project.  What a magnificent effort! 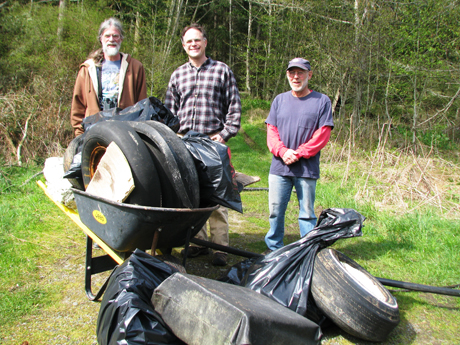 Ross (left), Lincoln & Rik found a lot to pick up at Third Lagoon! Thanks, you guys!