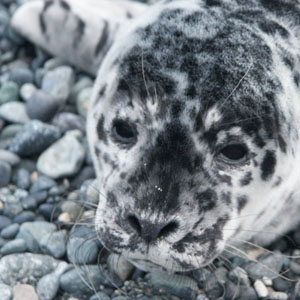 You gotta pass up picking up the pup....but be sure & report it!

Just got this note from Amy Traxler with the Marine Stranding Network:

Once again, harbor seal pupping season in San Juan County is fast approaching. Pups in the San Juans are born on off-shore rocks and reefs and depend on their mother’s milk for the first 3-4 weeks of their life.  At that point, the mother will abruptly wean it, forcing the pup to survive on its own.

Thanks to aerial survey counts conducted by the Department of Fish and Wildlife, we know that the harbor seal population in the San Juan Islands is believed to be at carrying capacity for the system.  This means that populations are stable and likely not growing due to limitations of the ecosystem like food availability. In San Juan County alone we have about 4,000 seals.  Assuming half the population is female and only half of those females are reproductively active, we can expect 1,000+ seal pups to be born in San Juan County this year!

So it is not surprising that every summer the San Juan County Marine Mammal Stranding Network (SJCMMSN) receives dozens of calls from shoreline residents and visitors who find pups on local beaches.  It can be very difficult to leave a beached pup alone but, if the mother is somewhere nearby, she won’t come back to her pup if there’s activity around it.

Another thing to keep in mind is that out of the 1,000+ seals born, many will not survive for various reasons.  Amy Traxler, Coordinator for the SJCMMSN, states: “I know it’s extremely difficult and heartbreaking to leave a pup on the beach and let nature take its course but, like it or not, this is one way nature controls population numbers.  As with most wildlife, not all of the pups born are meant to survive.”

Human disturbance can also play a potential factor in pup strandings.  “Mother harbor seals tend to be more skittish during the pupping season.  If you’re out in a boat or a kayak, please give all the seal haulout areas a wide berth for the next couple of months.  If you get too close and the seals get nervous, sometimes the moms and pups become separated when they rush to the water.  With our strong tides and currents, in no time these little pups can get swept away and end up on somebody’s beach where they’ll eventually starve to death.”

That doesn’t mean that the Stranding Network doesn’t pick up any of these pups. A limited number are brought to Wolf Hollow Rehab Center every summer, but only when they meet the strict regulations authorized by the National Oceanic and Atmospheric Administration (NOAA) – the federal agency that permits the Stranding Network to operate.

As the vast majority of these births occur in July and early August, things can get pretty hectic for the SJCMMSN.  “Shoreline residents need to realize that if they have a pup on their beach in July, there could be ten other residents in SJC dealing with the same thing on the same day,” says Traxler.  “But we do respond to all calls and try to do as many on-site visits as we can with our volunteer staff.”

It’s also very important to remember that all marine mammals are protected under the Marine Mammal Protection Act and people who have picked up seal pups in the past without authorization have been fined by NOAA Fisheries.

If you find a stranded marine mammal please call the Stranding Network’s hotline number at 800-562-8832 and leave a message that includes the species of animal and exact stranding location.  Next try to keep dogs and people away.  If possible, try to determine if the animal is dead or alive, estimate how long it is and note any distinguishing marks, obvious wounds or injuries.

The most important thing to remember is that all stranded marine mammals, whether live or dead, provide a unique opportunity to learn about their populations. Tracking stranded animals allows us to monitor diseases, contaminant levels, and the impact of humans on these populations.   The SJCMMSN relies on private citizens to help by reporting stranded animals.

If you’d like more information or would be interested in volunteering, call Amy at The Whale Museum – 378-4710 x27 or email her at amy@whalemuseum.org.