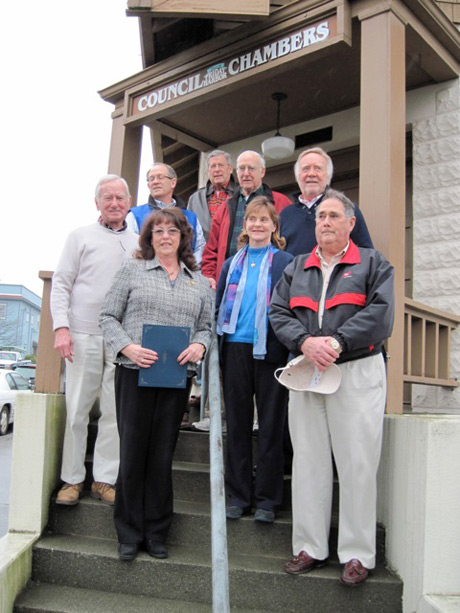 These folks are part of the glue that keeps us together as islanders…here’s more from Theresa (thanks, Theresa!):

Ten years ago the Eagles started flying on their own time and dime to help cancer patients living on  San Juan Island. Founder Vicky Thalacker still coordinates the flights which fly patients and their caregivers to various Medical Centers. Currently approximately 20 active pilots in the Eagles volunteer, flying close to 200 missions a year to provide travel assistance. Hundreds of patients lives have been made easier since that beginning. A treatment trip to the mainland could be as short as two hours as opposed to an all day event.

The Eagles received a Proclamation from Friday Harbor’s Mayor Thursday at the Town Hall. Mayor Carrie Lacher stated, “I am pleased to honor the San Juan Eagles for their significant contribution to the citizens of Friday Harbor.”

During the Town Council meeting  Mayor Lacher also proclaimed Saturday, February 18th as “San Juan Eagles Day” in the town of Friday Harbor, saying, “The San Juan Eagles exemplify what our community is all about, neighbor helping neighbor.”

Soroptimist brought the Eagles’ 10th Anniversary to the attention of Mayor Carrie Lacher, who is also a Soroptimist. They felt the Eagles needed to know how much they were appreciated with some kind of special honor.  The Soroptimists have been helping families on the Island since 2004 with their offer of free ferry tickets and commercial flights on bad weather days to cancer patients. A significant portion of money raised by Soroptimist is set aside for this project. In 2011 the costs were $15,679 raised by Soroptimists Fund Raisers. 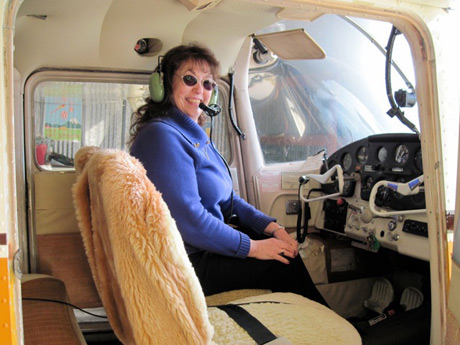 “What a wonderful project to be involved with!” Vicky Thalacker, pilot and founder of the San Juan Eagles shown here with “Baby,” her Cessna 172. Photo by Theresa Simendinger.

Long time island resident (41 years) and pilot Vicky Thalacker started the San Juan Eagles volunteer program. As a young girl Thalacker watched the jets take off from nearby Sandpoint Naval Station and dreamed of the day she would fly.

At 30, that dream came true with her husband’s encouragement. As Thalacker remembers, “I studied harder than I ever had. I wanted to be a pilot so much.”  In 1977 she earned her Pilot’s License.  After years of flying John Thalacker to his survey work, Vicky found a new calling. She envisioned a volunteer pilot group to fly cancer victims off island. Thalacker could relate, as she had helped transport a friend who battled cancer for 28 years. She considers this work a blessing as she is able to help others while doing something she loves.

Thalacker called a group of private pilots in the San Juan Pilots Association and formed a group of 16 volunteer pilots, two of whom were women, for their first meeting in 2002.

Eagle pilots volunteer their time and pay for the fuel and maintenance for their planes. Patients and their families are often overwhelmed by the costs of treatment and this assistance is a ray of hope in these emotional and difficult times. As many letters of gratitude from patients said, “This service is really wonderful and it helps so much to know my community cares.”

Any island flight is filled with beauty and a serenity that can only be ethereally healing for a patient in that kind of stress. The people of Friday Harbor offer a heartfelt thank you to the San Juan Eagles.