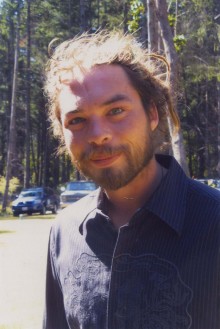 Born March 5, 1982, in Grand Forks, British Columbia, Canada, Sam is the son of Thomas R. Carter and Nina A. White.

Sam attended 1st-12th grade in Friday Harbor, also attending Skagit Valley Community College and Shoreline Community College, where he earned his high school diploma and most of his credits toward an associate arts degree. During that time, he enjoyed rich friendships with peers and faculty, always living by Mr. Westphalen’s “Golden Rule”.

After graduation, in 2001, Sam, along with Todd Lowen, Casey Baisch, Brook Melville and Rosa Blair (mentored by Ben White), spent the next year studying for ISA certification for arbor culture, passing all but one section of the rigorous exam.

Sam balanced commercial fishing in Alaska with arborist work in the San Juan Islands for his remaining years. Finding community in three states: Alaska, California and Washington, Sam spent his summers fishing, falls doing arborist work and winters with close friends. He loved snowboarding, reading cook books, developing recipes and most of all cooking for friends.

With a kind smile and warm sincere interest, he met the world each day. The ring of his laughter as he engaged small children will echo eternally in the canopied foliage of the trees he so dearly loved.

He will be sorely missed…

Losing his mother at age 11, he never got over the pain of her absence; one of his wishes was to be buried by her side. His ashes were transported to Egegik, Alaska on Dec. 3, where he is surely now resting in his mother’s arms.

Sam found his way into many hearts in the community and his family thanks them all for their support during this time of loss.

There was a small gathering at Evans Funeral Home on Sunday, Dec. 2, 2012, giving family and close friends an opportunity to say “good-bye” before Sam was flown to Alaska. A funeral in the Egegik Baptist Church, with Paul Bischoffski officiating, was held Monday, Dec. 3, 2012, at 11 a.m.

A celebration of Sam’s life will be held at the Friday Harbor Grange, Dec. 23, 2012. The family encourages all who knew Sam to come and to share in the lasting joy his life gave us all.