Roving Update reporter Louise Dustrude got a chance to catch up with Jill, Ann and Louisa to find out what they were up to, and she turns in this report: 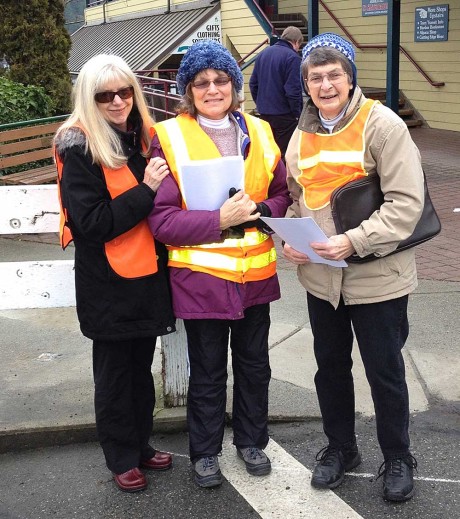 Wearing orange safety vests, Louisa Nishitani, Ann Jarrell, and Jill Johnson were working the ferry lanes on Monday, handing out information about the proposed Cherry Point coal terminal and encouraging people to send in their comments before next week’s deadline.

Louisa and Ann and friends have been at it since Thanksgiving, passing out information in the ferry lanes both here and in Anacortes.

Their feeling is that most people have appreciated getting the information — and they hope their efforts have generated some letters.

An Environmental Impact Statement (EIS) is required before the coal terminal can become a reality, and the public has been invited to suggest topics to be addressed in the EIS — such as property values, orcas and other marine life, clean air and water, boating safety, fishing, tourism, or anything people feel might be impacted by the shipping of coal.

On the mainland, most concerns center on the coal trains, but here in the islands the worries are about the ships expected to pass through our waters carrying coal to markets in China.

Unlike oil tankers, these ships would be single-hulled and are required to have tug escorts only while docking. They are expected to return empty, except for ballast water from Asia which may contain potentially harmful invasive species.

Oil from the 1989 Exxon Valdez spill is still being found in the waters of Prince William Sound. The coal ships will run on bunker C oil, which is heavier than water, would sink and adhere to the bottom, and therefore be even more difficult to clean up.

Comments can be sent via email to comments@eisgatewaypacificwa.gov by 5 pm Tuesday, January 22nd. They should include your name and address, the significant adverse impact you’re concerned about, and a statement beginning “I request that you study ….” If you have several concerns, send a separate letter for each one.