Back in action: The Anacortes/Sidney ferry run opens 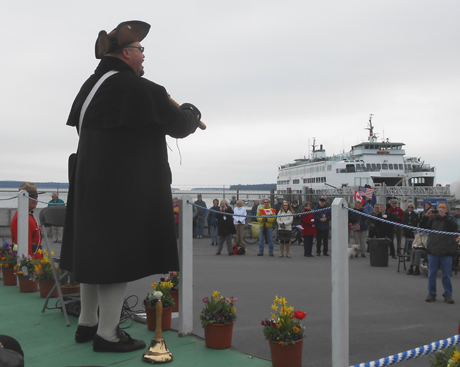 Anacortes town crier Richard Riddell thanks the Sidney crowd for their hospitality, at Sunday’s celebration in Sidney, BC of the opening of the international run for Washington State Ferries.

This past weekend saw the annual celebration of the ferry that connects neighbors…and Josie and I were there:

Canadians in Sidney, BC turn out to greet the Chelan as it arrives on Sunday.

On Sunday, the Anacortes/Friday Harbor/Sidney, BC ferry ran for the first time this year, as Washington State Ferries’ northernmost route (and only international route) got underway for its nine-month season. The Chelan was greeted at the Sidney dock by over a hundred cheering Canadians, welcoming the Americans for the annual re-opening of the marine highway between the neighboring countries.

A short ceremony celebrated the friendship between the two nations and their shared border, as leaders from both sides of the water were greeted by Sidney town crier Kenny Podmore (in blue in the pictures). Anacortes town crier Richard Riddell replied in turn. The mayors of Sidney & Anacortes spoke, and Member of Parliament Elizabeth May (representing the Sidney area) was on hand to promise to do everything she could to keep the ferry route viable & running (she had just flown in from Montreal). 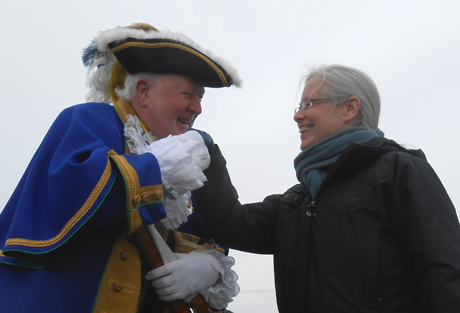 The annual celebration is sponsored by Sidney’s Sister City Association, as Sidney & Anacortes are sister cities. 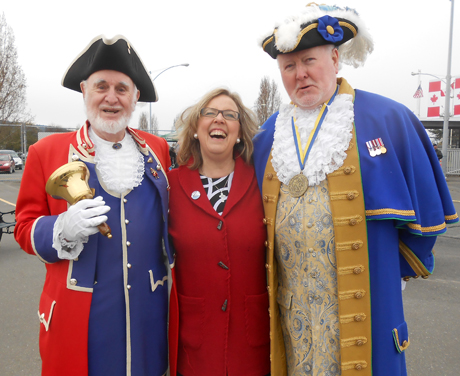 Sidney’s Member of Parliament (and head of the national Green Party) Elizabeth May offered rousing assurance that she would work with the government of Canada to protect and preserve the international ferry run. She is joined by the two Canadian town criers (Victoria’s Robert Alexander, left, and Sidney’s Kenny Podmore) at the celebration Sunday.