The banner is out in Sidney, welcoming visiting Americans this weekend… 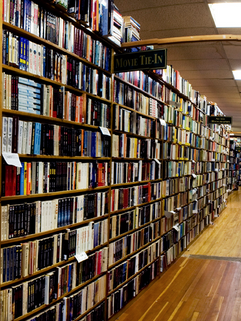 Over half a million books at Russell’s….

Why go that way? I’ve been in Victoria (mostly) since New Year’s, just so I could tell you. Here are some ideas for your visit:

For starters, Victoria is a very walkable town, so just go up & down the streets & look for what you’re into….lots of bookstores (Russell Books is my current favourite – you’ll get the idea from this writeup in the local paper, on their website).

There are tonnes of yarn shops, as well as chocolate shops, including Rogers Chocolates, which has been in the same spot since the 1800s, and has fed presidents & queens & kings.

Looking for clothes? Check. Got ’em.

Looking for souvenir stores so you have something to wear that says “Canada” on it, for next year’s Winter Olympics? Got ’em. 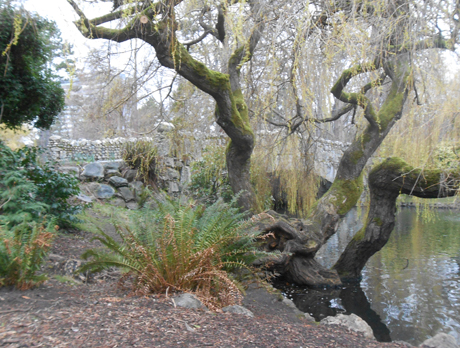 The bridge over the water in Beacon Hill Park – an easy walk next to downtown – earlier this week as the park shakes off its winter coat & flowers & grass re-emerge. Be sure exploring this amazing urban greenspace (since the 1850s!) is in your plans when you visit.

• It’s easy to get where you want to go. 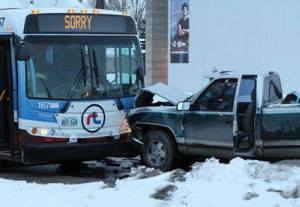 That’s not in Victoria, but the point is clear – Canadian buses are unfailingly polite.

One of the things we like here in Victoria is getting around – and there’s a good bus system for that. If you go to Sidney, it’s easy – you get picked up by the bus & it takes you right into downtown Victoria 17 miles away….for under $3. So, no, you don’t have to bring a car.

And since you gotta pay for parking nearly anywhere you’ll want to go, that’s just one more buck you’ll save.

The buses have their route in lights on the front (like US buses), and also have the lights say “not in service” or sometimes “sorry” if the bus isn’t picking people up, or if it’s full. 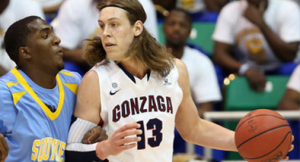 • You can watch March Madness basketball on TV here at any pub, as long as hockey’s not on. (Local hockey team to cheer for: The Canucks. I’m telling you so you’re welcomed in….)

Also, Gonzaga has two starters who are Canadian (including BC’s Kelly Olynyk, right), and they’re ranked #1 in the country.

Baseball starts soon (the Mariners’ Michael Saunders is from Victoria), pro basketball is on TV, too (the Lakers’ Steve Nash is from these parts), soccer is pretty much all year, and then there’s curling. Pretty much any sport you want.

• A great Canadian hero is memorialized in Victoria – at Mile Zero of the TransCanada Highway (which starts on the other side of the country & comes all the way here), there’s a statue of Terry Fox.…here’s a bit for you to read about one of the great inspirational people of the last half century. 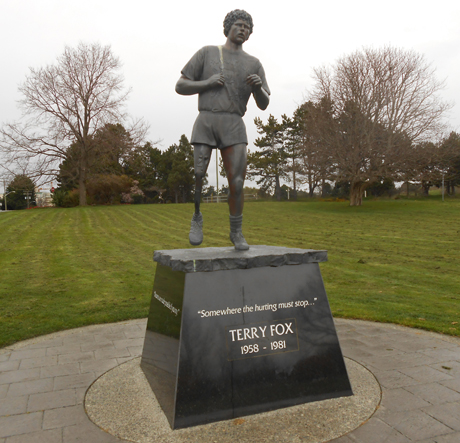 That’s the Strait of Juan de Fuca behind Terry Fox at Mile 0, at the south end of Beacon Hill Park.

There’s lots more to see & do in Victoria – hope you get a chance to come soon!

Travel correspondent Ian Byington’s special reports to the Update are posted whenever the prose is clear, the photos crisp, and the weather nice enough to go out & play in. He & Josie currently live in Victoria, BC after nearly two decades on San Juan Island.