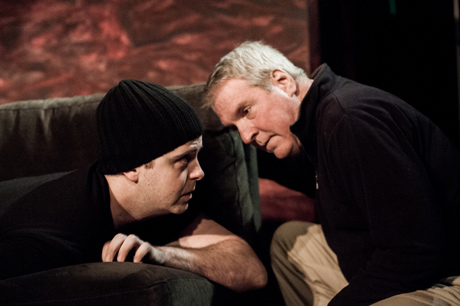 Eric Gatton (left) and Dan Mayes have father-son issues, but the story only starts there in “A Number,” playing Thursdays-Sundays at the Fairgrounds (showtime: 7:30pm Thursday-Saturday, with a 4pm start on Sunday.) The show runs till April 21st. Photo by John Sinclair.

Island Stage Left has another winner this spring with its production of “A Number” by  Caryl Churchill.

In this two-man production, director Helen Machin-Smith and her cast take on a number of challenges: the show is only 55 minutes long, but packed with enough going on that the audience last night, at the end of the first section, could be heard to exhale (whew!) as the lights went down. The script has no stage directions, and no punctuation, so the actors have to find their place in the story, guided by only the words. And it works, brilliantly.

The themes are complex – at one point, one of the characters says something about life is complicated, so we get to unravel it. That’s what I’m guessing you’ll be doing after the show is over…and there’s great fun in that. 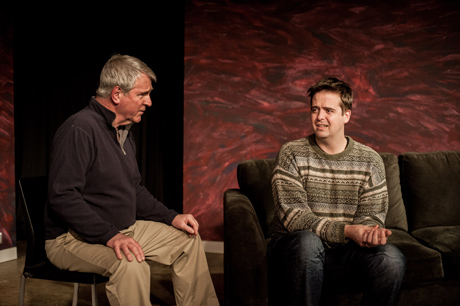 Salter tries to reassure his son everything is all right, in spite of his own uncertainty. Photo by John Sinclair.

The show explores a future time when the cloning of people works. The dad (Salter, played by Dan Mayes) has to face the consequences of his decisions that have led to versions of a dead son. Two of his test-tube progeny & the original son are played by Eric Gratton (remember him in “Someone to Watch Over Me” last spring?), and each has a different take on his fate, his response to it, his connection (and lack of connection with his dad), and finally his outlook on life. The rapidfire overlapping dialogue is amazing on its own – a verbal dance that Dan & Eric execute sharply but naturally, which gives an sense of the ordinary to an extraordinary situation, overlaid with a relentless intensity.

In spite of what he learns from each boy, Salter struggles with his doubts about his decisions, the results, and his own guilt. More than once he says he’ll get a lawyer to straighten it all out, but it’s clear it’ll take more than a court to bring clarity to the shadows each character, one way or another, has.

This may be the most simple play Island Stage Left has produced; this may be the most complex. The company will be presenting the show to both Spring Street School students and Friday Harbor High language arts classes, and I’m looking forward to seeing their feelings about it, afterwards.

There is a solemn darkness to this show – it IS literally about life & death – that is broken up with lines like the son saying to his dad, about genes: “We’ve got 30% the same as lettuce. Doesn’t that cheer you up at all?”

I sure liked this show, and am planning to see it again this weekend. I hope to see you there!

Here’s what the Daily Telegraph said in their review:

“Magnificent…. contains more drama, and more ideas, than most manage in a dozen full-length works….

“It combines elegant structural simplicity with an astonishing intellectual and emotional depth…. What a tremendous play this is, moving, thought-provoking and dramatically thrilling.” 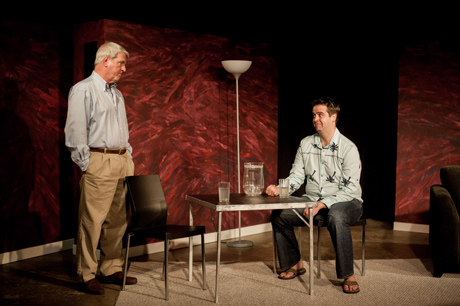 Trying to find the cheerful side of a dark situation…photo by John Sinclair.