Review: “The Taming of the Shrew” is amazing! 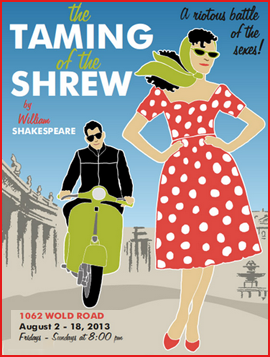 “The Taming of the Shrew” plays tonight & finishes its run next weekend.

It’s always fun to see people smiling at the end of a show as they’re walking out, and there was a lot to smile about with this summer’s production of Shakespeare’s “The Taming of the Shrew” by Island Stage Left.

The story is set in Italy in the first place, but director Helen Machin-Smith kicks it forward to 1955, with more up-to-date lutes & dress & James Dean hair & glasses. The setting complements the story, adding a romantic air (Jonathan Shue’s song in the middle of the show gets people dancing – nice touch) with a splash of modern stylishness…and it works.

The cast takes it from there, creating distinct people who work hard to get what they want: Petruchio (David Foubert) is looking for a wealthy bride, and is okay with looking past occasional (well, frequent) shrewishness; Bianca (Kimberly Wood) & Lucentio (Jonathan Shue) wend their way through deceit & swapped identities to find love, together; father Baptista (Daniel Mayes) gets himself the two sons-in-law that he was seeking; and Katherine (Kathyrn Metzger) discovers ….well, just wait till the end. She’ll tell you.

One of the challenges of this script is to make Petruchio somehow sympathetic, beginning with his big, brash entrance – David does a good job presenting himself to his future father-in-law with a nice mix of bold earnestness & humor, and shows he’s Kate’s match as he first meets her & quickly, head-spinningly marries her right away.

It’s fun to watch David appear to soften as he turns away from his clashes with Katherine to address the audience, with a resolute grin as he outlines how he hopes to tame the shrewish part of her:

This is a way to kill a wife with kindness,
And thus I’ll curb her mad and headstrong humor.
He that knows better how to tame a shrew,
Now let him speak; ’tis charity to show.

Similarly, Kathryn’s Kate undergoes an evolution from bad-tempered (even her dad is betting against her) to someone you can imagine wanting around. David & Kathryn create a compelling, entertaining dance between their characters, and it’s great theater. It was fun (from where I sat) to hear people laughing through the whole show, except for the parts where they were just chuckling.

The rest of the cast is strong, with Helen’s pacing keeping the show energetic & well-paced, without sacrificing clarity. The subplot with three suitors after Kate’s younger sister Bianca keeps surfacing, as everyone involved pretends they are something they are not (in marked contrast to Petruchio & Katherine, who are straightforward & direct, what-you-see is what-you-get folks).

Each of the “minor” characters plays a major role in holding the story together.

Of special note: ISL regular Alan Geddes’s Grumio is a perfect foil for his master Petruchio, both as the butt & object of his master’s anger and as the person who explains his master to the world; his reactions to the craziness around him are spot on, in one of Alan’s strongest performances to date. Dan’s Baptista is a super mix of respectful elder, slightly dotty parent, and determined dad – he might be a little confused, but he knows what he wants.

Kimberly’s Bianca is delightful, so you can see why the guys like her, and bratty enough for us to see that it’s a two-way street with her sister Kate. I liked the way servants Graham Crawbuck (Biondello) & Jason Marr (Tranio) cheerfully create the confusion that unravels at the end – they are totally likable characters, in a totally likable show.

The play runs tonight at 8 at the Wold Road stage, then next weekend on Friday-Sunday, at 8pm for its last weekend.

This is one you don’t want to miss. I’m going again tonight, and I hope to see you there!