Dateline: Victoria…check our neighbour out in the fall! 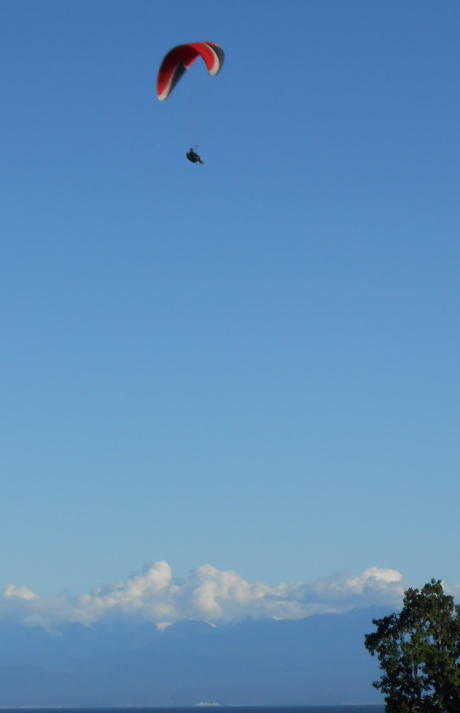 When you go to Victoria, be sure & take a walk along Dallas Road, along the water, looking south to the Olympics across the strait & up at the hang gliders….photo by Ian Byington.

I was hoping to impress on you how autumn-like it was in Victoria, so I chose the warmest week of the year – this week it hit over 80 degrees Fahrenheit (27 C.), with people I meet in the streets saying, “Is it like this all the time, here?” Since I want them to know the truth, I mention that surveys have shown that great numbers of Canadians hope to retire here, as this is known as the warmest, most temperate place in the country. Take that.

Anyway, it’s pretty warm this week, if you ask me.

Here are some other things going on, which I’m telling you about because I hope you’ll come over from the island & visit, soon. I miss you! 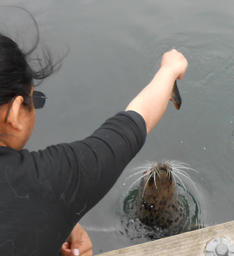 Similar to Popeye the harbor seal down at Friday Harbor’s marina, people go to Fisherman’s Wharf in Victoria to feed the harbour seals there, who are generally quite roundish by the end of the season. Photo by Ian Byington.

When you come, you’ll want to say stuff that makes it sound like you read a book about “How To Talk Canajun.”

You already know that it’s a washroom, not a bathroom, that the $1 coin is a loonie (it has a loon on it, for easy reference), the $2 coin is a toonie, and the $5 bill is called a five dollar bill.

It’s kilometres, not miles (here’s an easy reference for converting, using the Fibonacci sequence), and it was fun when someone asked how long Josie & I have been married, and we said nearly five years, or 7.2 in metric.

You know how the Mighty Seahawks have a “12th Man” when the crowd makes itself part of the game – CFL teams have a 13th Man, since there are 12 players.

You know how when you get a “brain freeze” it feels, when you drink something cold too quickly – here it’s called “Slurpee Head.”

And, like San Juan Island, if it’s cool outside it’s probably summer & if it’s hot it’s probably spring or fall. References to “June-uary” and “Fog-ust” are kinda universal. 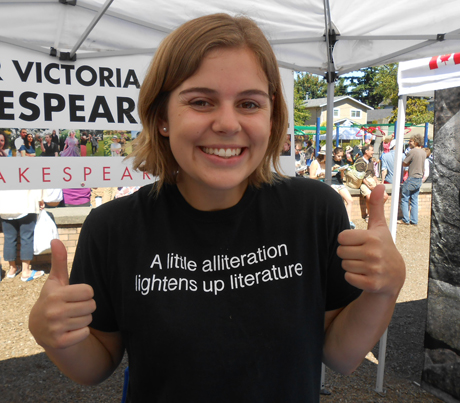 Literary types like Karly abound – she was selling tickets for the Shakespeare shows at the Moss Street Market. Photo by Ian Byington. 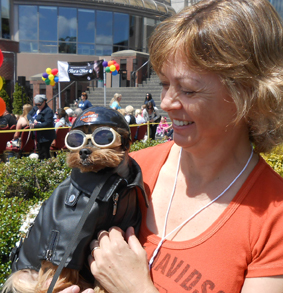 There was a dog show over at he Delta Hotel, across the harbour…this little guy was a finalist for best prepared for a motorcycle ride, I think. Photo by Ian Byington.

It sure was cool that islanders Tom Schultz & his daughters Emily & Alaina dropped by Victoria the other day – great to see how well everyone’s doing & to catch up on stories from the island….

Earlier this week, I got to visit with the Road Scholar group that was visiting Vancouver Island. Group leader Adele Grover was there, too, with the program that is sponsored by Skagit Valley College/San Juan Center. And…they were having a great time!

I hear Brenna Woods will be over this way this weekend, and that the Yacht Club is bringing some 70 people over to the Inner Harbour this weekend as well…. 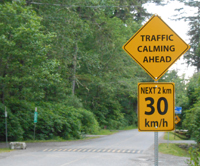 That would be speed bumps. Photo by Ian Byington.

So far, I’ve heard that a lot of islanders have discovered the Royal Scot as an affordable place to stay, just a block from the harbour & a block from the Clipper to get here (if you don’t come on the ferry, which drops you in Sidney, a few blocks from the bus which takes you near the hotel for $2.50)…check it out, especially later in the fall!

And yes, hockey season starts a month early this year, because of the Olympics….the NHL shuts down for nearly a month in the middle of the season so that players can play in the Olympics. So, instead of the end of October, the Canucks have their first game on October 3rd this year….. 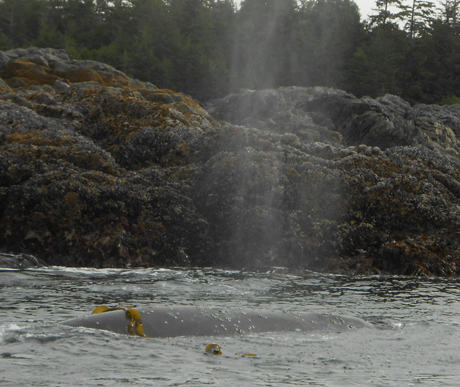 Or…you can just keep going! Vancouver Island is long & seems to just keep going…here’s a grey whale decked out with a little kelp that we saw north of Tofino, earlier this year…..photo by Ian Byington.

Travel correspondent Ian Byington’s special reports to the Update are posted whenever the prose is clear, the photos crisp, and the weather nice enough to go out & play in. He & Josie currently live in Victoria, BC after nearly two decades on San Juan Island.