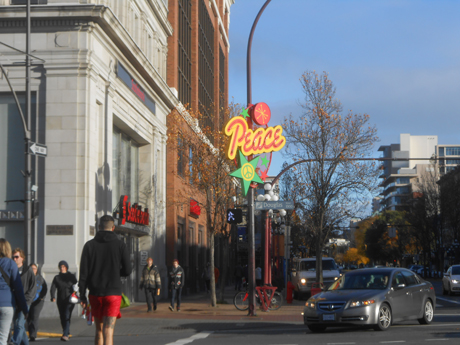 This is part of a continuing series by Update reporter Ian Byington to explain the ways of Canadians to my brother & sister San Juan Islanders, so that you think it’s a good idea to get on the ferry, ride for an hour & ten minutes, and wahoo! you’re in a cool new place that’s all of eight miles from San Juan Island. 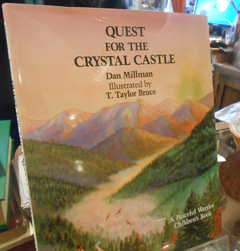 It was fun to see Dan Millman’s book at Dark Horse Books, with art by San Juan Island artist Taylor Bruce (I love her stuff!)…photo by Ian Byington

Here are some things you’ll like, and differences to watch for – reporting from Victoria:

• Drivers are more considerate than any place I’ve ever driven. If anyone is in a rear-end fender bender, it’s because they slowed up to let someone go ahead, in front of them. This is very easy to get used to….

• There are math things.

A kilometer is about .6 of a mile. All the signs are in kilometers for distance & speed, so just check your speedometer for the other numbers.

Meanwhile, it’s exciting for San Juan people to see the gas price – at $1.15 presently, that looks like a deal. Problem is, even compared to Friday Harbor pump prices, sharpen your pencil on this one: Vancouver Islanders actually come to Friday Harbor for cheaper gas. That’s because it’s $1.15 per liter (there are nearly four in a gallon – it’s about a quart), so it’s nearly $4.60/gallon here right now.

And yes, Canada is the largest oil supplier to the US. Just don’t keep enough for themselves.

Coffee should be measured metrically, but it’s not – you’ll see the usual ounces, with 12, 16 & 20 being the regular sizes. But not so with stuff in the produce department – fruit, veggies & meat are usually either offered in 100 gram (that’s a quarter pound) portions, or in pounds & ounces…far as I can figure, they use whatever sounds cheaper.

Canadians are bi-lingual & bi-metric, so this causes no fuss, particularly. 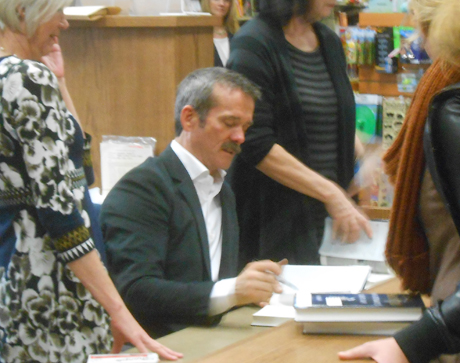 Canadian space hero & rock star Chris Hadfield came by the other day to sign his new book for over 1500 folks at a local bookstore, so we dropped by to wave at him. Woman next to me fainted – thought he was waving at her, but he was saying hey to me. I just know it. Photo by paparazzi photographer Ian Byington.

• It’s great to see folks from San Juan Island around the Inner Harbour, looking at the boats. It’s fun to watch the locals here say, “Wanna buy a boat f’ya’self?” to the sage reply, “Got one. ‘S enough. Cheers.”

• OK, you didn’t believe me when I told you Commander Hadfield was a rock star.

Here’s proof, singing with the Barenaked Ladies & The Wexford Gleeks. 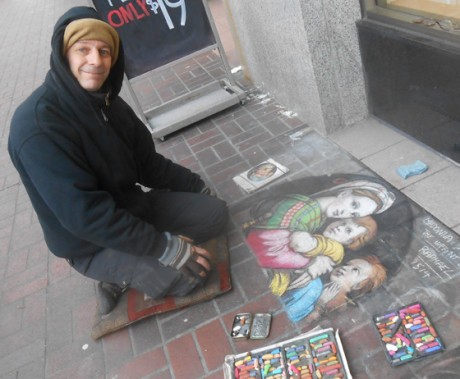 In Victoria, we’ve gotten to know some of the coolest people in the streets – we’d seen his chalk sidewalk drawings for the past few years, and now have finally met Ian, the guy who creates such amazing work…photo by Ian Byington. 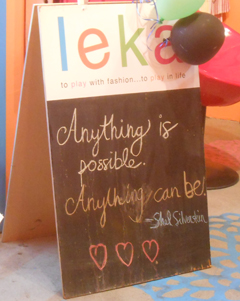 •  There are lots of things to do in Victoria, starting with shopping.

This time of year leads naturally up to the Greatest Shopping Day of the Year: Boxing Day, the day after Christmas. Much like Black Friday in the US – crowds, pushing & shoving, early lines, and ridiculous penalties for misconduct. Like hockey.

• Canada tried to have Black Friday this year, by the way. Forgot everybody’s at work that day. Sometimes imitation is the sincerest form of flattery; sometimes it’s just silly.

• The way things happen: Josie & I went into five places that were too crowded for breakfast on Saturday, and all five took the time to tell us 2-3 other places to go that we would like. Cheerfully.

• I hope you get a chance to come along from San Juan Island to Victoria & see it all decked out for the season…it’s bright & sweet & warm, even with the cold. Hurry – the WSF ferry to Sidney quits running for three months (early January to the first week of April), so this is your big chance. 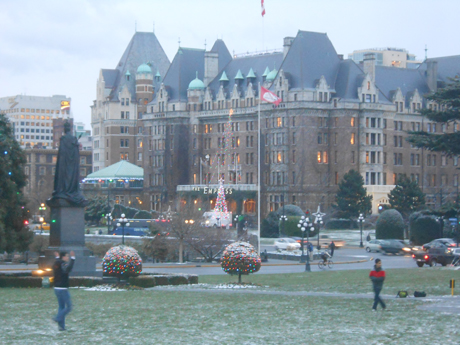 Looking at The Empress across the Legislature’s Lawn, during the Great Blizzard of 2013 two weeks ago. You almost certainly have more frost in your freezer. Photo at dusk by Update weather reporter Ian Byington.

Travel correspondent Ian Byington’s special reports to the Update are posted whenever the prose is clear, the photos crisp, and the weather nice enough to go out & play in. He & Josie currently live in Victoria, BC after nearly two decades on San Juan Island. You can visit his new blog at The World According To Brother Ian.