EMS has a New-Used Ambulance 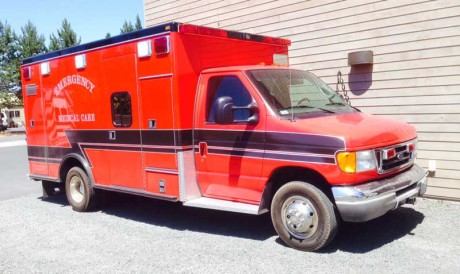 You may have noticed a new red ambulance in front of the aid station on Spring Street. Two years ago an ambulance search team formed to identify new ambulance specifications to replace the current 22 year ambulance, an old Ford E350. It was determined by researching industry standards, Emergency Vehicle Technicians recommendations, and operational cost vs replacement calculations that 20 years should be the maximum time to own an ambulance with rural use. The group determined needs and wants for a new ambulance, taking into account EPA, NFPA, and manufacturer regulations.

The funds were allocated and preparations were going forward to purchase a new ambulance at the market price of $140K-$180K. All the while, the group kept an open mind toward purchasing a used ambulance, however the agencies needs are very specific and no appropriate vehicles had been seen on the market for quite some time.

In April of this year, Ben Waldron – EMS Operations Director, was skimming a fire/ems industry online news source and noticed an ambulance listed by Woodinville Fire that fit the bill. Woodinville Fire Department had closed a station and the ambulance was no longer needed. It was exactly the design and specs that were wanted by the search group. Waldron immediately put a hold on the ambulance and after Master Emergency Vehicle Mechanic, Paul Spencer, inspected the vehicle, it was given a two thumbs up. EMS purchased the 2004 ambulance with slightly over 50,000 miles for $35K. Thereby saving the district between $105K and $145K.

This new-used ambulance will be in service as soon as Washington State licensure and minor upgrades are completed. Using current replacement schedules, the next ambulance to be replaced is the 1997 Ford E-350 in the year 2017.