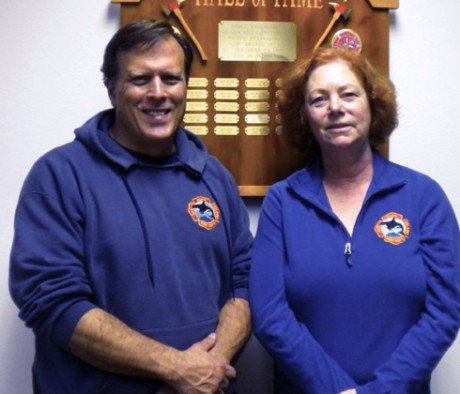 As Thanksgiving approaches, Sheila Harley, the Public Information Officer for San Juan Island Fire & Rescue says, “We have so much to be thankful for on this Island and our emergency responders are at the top of my list.”  Sheila sent us this portrait of two of our finest…

Kurt and Peggy are unusual in San Juan Island Fire & Rescue in that they are residents of Brown Island. They are the Caretakers there and their job requires them to be firefighters. So they are assigned to Station 37 on Brown Island.

Peggy grew up in Renton, Wa,  Kurt grew up in DesMoines, WA, and they raised their family of two boys in Auburn, WA. Their son, Michael, the assistant Harbor Master here in Friday Harbor, is also a firefighter. Their other son lives in Glendale, California.

Before moving to San Juan Island Peggy and Kurt owned a home inspection company which they sold in 2005.  Both have their 100 Ton captain liscenses and before they left the States for a year and a half in Nicaraugua inspecting newly built homes there,  Kurt and Peggy had fun on the weekends running Dive Boats out of Tacoma.

Kurt is a Liutenant, Firefighter 2 (structual), WF2 ( wildland), and Fire Boat Operator. He heads up the fire boat operation. His favorite job is captaining the Sherrif/Fire boat called the Sentinal. In his position, he supplies water to properties close to the shoreline and is involved in search and rescue on the water.  His crew have a Boater Safety Card with various other qualifications required by the department they are employed with.

Peggy is a WF2 (wildland) and is a member of the San Juan Island Fire & Rescue Logistics Team which provides food and drink for firefighters on the fire line. She loves to cook so this job is very satisfying for her.

Kurt says: “We need more good people to join our great organization.  Yes, you put in a lot of time and energy but get more out of it than you put in.”  Great comraderie, getting to play with fire are some of the benefits.

Peggy says that there are lots of ways to help out in the fire department.  “The more you put in, the more you get out of the group”.  She probably would have joined the Logistics Department sooner if she had known about the various ancillary jobs San Juan Island Fire & Rescue has to offer.

**San Juan Fire & Rescue welcomes all interested men and women ages 16 years and above to drop by the Mullis Street Station and make an appointment to see what we are all about.  We offer some fun ancillary positions as well.  Look online at www.sjifire.org  for lots of good information.  Or, you could view our Facebook page: San Juan Island Fire & Rescue. Our phone # is (360) 378-5334. We would be pleased to talk with you.