The Dawgs vs The Cougs 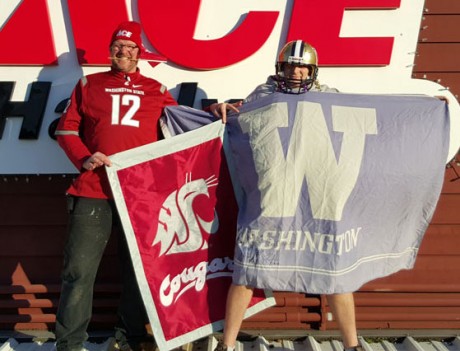 It’s that time of year! Time to get friends and family together and enjoy some football on TV, and a Thanksgiving Feast. And then, the day after, friends and families will be torn apart by the Apple Cup.

Donny Galt and Mike Martin are a perfect example: Good friends until that one day a year when they’re bitter enemies. The Dawgs vs The Cougs! The Washington Huskies lead the Washington State Cougars 96 – 32 with 6 ties. However, in this rivalry, records have mattered as much as friendships. Since 1900, this is the one game a year that has been dividing family and friends.

“I actually really like the Cougars,” said Mike. “I’ll root for them in every game except this one.”

As for Donny? He jokingly stated “I think that if Friday Harbor High School’s colors weren’t the same as the Huskies I would like to see a ban on all Purple and Gold from San Juan Island.”

As has become a tradition for Donny and Mike, if the Huskies win, Donny will fly the Washington Husky flag in front of Ace Hardware for a day. “My flag is from Husky Stadium and it has Don James’ autograph on it,” Mike said. “I think Donny’s flag is from the shelves of Ace!”

However, if the Cougars win, Mike has to stand on the corner of Ace Hardware and wave the Washington State Cougars flag for an hour on Sunday.