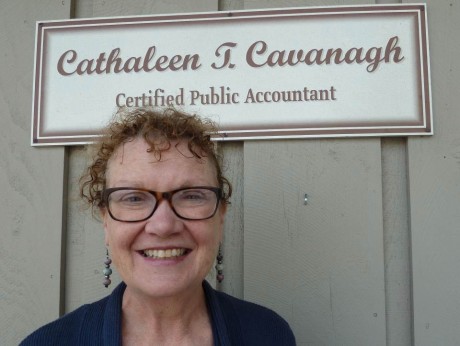 “Cathaleen T. “Cathy” Cavanagh, 66, died of cancer in her San Juan Island, WA home on January 30th.  Cathy was born in Lamar, Colorado on September 27, 1949.  She was the eldest daughter of seven.  Cathy earned a Bachelor of Arts with an Accounting major from Mount St. Scholastica in 1971.  She was a pioneer for women in this field and the only woman in her Accounting classes.

Cathy started an accounting practice in 1976 in Concordia, Kansas, where she lived for the next 10 years while raising her first two children Lawrence “Richard” Uri III and Christine “Christi” Uri.  In 1986, Cathy made the courageous decision to move across the country to San Juan Island.  Cathy’s dream was to “live somewhere she would want to vacation,” and she chose Friday Harbor.  She walked off the ferry at the age of 37 with no house, no job, and no friends nearby.  She frequently described her decision to move to the island as the best decision of her life.

Cathy quickly found a job working as an accountant at Allan Hyco’s office. She later co-founded the real estate office of Cavanagh, Miller & Wood, which became Windermere.  She then left real estate and opened her own accounting/CPA practice, providing accounting services to individuals and small to medium businesses for the rest of her life.  After moving to the island, Cathy married her second husband Stevens J. Townsdin (deceased) and had her youngest child Jens Townsdin.

Cathy loved her work, but her true passion was community service.  It is difficult to name a local organization that Cathy has not touched in some way.  In addition to many volunteer activities, she helped found the San Juan County Economic Development Council, served on the San Juan County Chamber of Commerce, and was a longtime member of the Board of the Community Foundation of San Juan Island.  In recent years, she was particularly passionate about the Community Foundation’s scholarship programs and its work to open Peace Island Medical. She was instrumental in the building of the new medical facility.

Cathy is survived by her three children Richard, Christi and Jens. She is further survived by her daughter-in-law Ferah Uri, four siblings, nieces, nephews and numerous friends.

A Celebration of Cathy’s life will be held Sunday, February 7th at 3:30 PM at The Brickworks. Her family requests that in lieu of flowers, donations be sent to the Community Foundation of San Juan Island (www.sjicf.org) or the American Cancer Society (www.cancer.org).

Questions about the services and remembrances can be emailed to cavocavanagh [@] gmail.com.