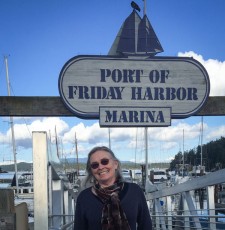 Marilyn O’Connor will retire on July 1st after more than eight years as Executive Director of the Port of Friday Harbor.

In the monthly newsletter that accompanies port and airport bills she illustrated her feelings about the move — “a mix of terror and glee” — with a picture of a little girl doing a cannonball off a big rock into the water.

Marilyn started working for the Port in 1985 and held the positions of Port Auditor and Deputy Director before she became Executive Director in 2007.

During her years with the Port, she has worked on projects including the acquisition and development of Spring Street Landing and passenger terminal, reconstruction of the airport taxiway, installation of airport lighting and signage, rebuilding the Jackson Beach boat launch and reconstruction of marina docks, piers and electrical systems.

Now the Spring Street Landing Building is nearing completion three years after a disastrous fire. The Port Commission has signed a lease with Debbie Rishel for a reopened Downriggers Restaurant on the upper level, and with three other businesses for the lower level. San Juan Excursions, San Juan Safaris/San Juan Outfitters, and San Juan Island Whale & Wildlife/Black Fish Tours will be able to occupy their spaces in June, and Downriggers will reopen once the building is completed and the interior work is finalized.

Marilyn and her partner, Gary Alspaugh, have a sailboat and a camper. So they’ll be able to head out in all directions, though she says she also has a lot of house projects and a garden to keep her here summers.

She and her previous husband came here in 1979 to pick up a sailboat “and just stayed.” She worked at a number of jobs including as office manager for Aeronautical Services before finding her niche at the Port.

To fill her position Port Commissioners Mike Ahrenius, Greg Hertel, and Barbara Marrett will first determine what’s needed in the next person, and how to handle the process, and then begin accepting applications in April.

Marilyn says she has “loved every minute” of the job, working with people and boats and airplanes. And she’ll be a little sorry to leave her corner office overlooking the marina. But after 31 years, it will be great to spend time with family and friends and get out to enjoy the island lifestyle.