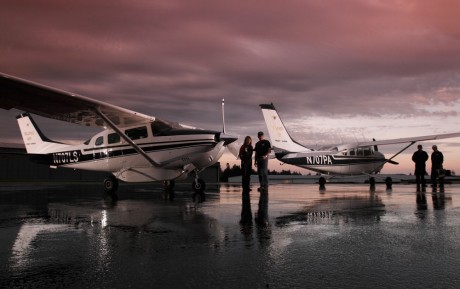 A reception will be held at the Roy Franklin Terminal at Friday Harbor Airport on Sunday, April 17th at 2:00 p.m. to honor the Featured Pilots for 2016: Bill Sargeson and Jackie Hamilton. Islanders are invited to celebrate the occasion of this annual update of the San Juan Aviation Museum. This project, started in 2008, is jointly sponsored by the San Juan Pilots Association and the Port of Friday Harbor.

The Museum records the history of aviation in the San Juan Islands since the early years after World War II when Roy Franklin first established scheduled air service linking San Juan Island with our neighboring islands and the mainland. As a living Museum, displays are added each year to honor featured pilots who have made major contributions to this community and to aviation.

On this occasion, we will recognize and pay tribute to the father-daughter team—Bill Sargeson and Jackie Hamilton. After 13 years of flying with the Air Force Reserve and 34 years flying with Pan Am and United Air Lines, Bill moved to our island in 1987.

The hangar that he bought then has become the base for Island Air, which his daughter, Jackie, founded in 1993 as a charter and flight instruction service. It soon became our fixed-wing medical evacuation service.

Under Jackie’s leadership, and with her father Bill’s advice and encouragement, Island Air has flown more than 2,000 med evac missions to mainland hospitals, and has won national awards as the only woman-owned and operated medical evacuation service in the country.

Island Air Ambulance purchased its own Cessna 208 Caravan in 2014, with a turbine engine, advanced instrumentation, and full de-icing equipment which can deal well with almost all weather conditions. Because of Jackie’s and Bill’s leadership and commitment to serving our community, Island Air continues in the long tradition of service to the San Juan Islands community started by Roy Franklin seventy years ago.

Islanders are invited to join in this celebration of our history. Light refreshments will be served.