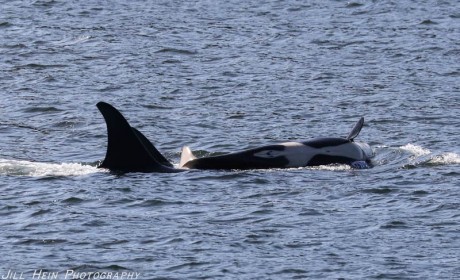 The Center for Whale Research shares this good news…

In light of the recent news of deceased L95 and the unknown SRKW calf, we are happy to have good news from the southern residents for a change. J53, a 2015 calf, has been confirmed female.

Photographs of the calf sent to CWR earlier this week by Jill Hein and Sara Hysong-Shimazu confirm that the calf is female. Only one other calf in the so-called “baby boom” has been confirmed female, J50.
All others are male, except for L123 who’s sex remains unknown at this time.

We are delighted to have another young female in the population. This is great news for the southern residents.