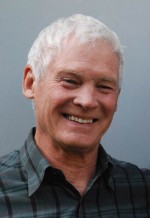 Geoff Prentiss of Prentiss Wickline Architecture and his business partner Tom Lenchek have merged with a Seattle firm and are now looking at nationwide expansion.

Geoff grew up coming up to San Juan Island to visit his grandmother and extended island family and to play on the beaches and hike in the woods.

Both of his grandparents were early residents of the island. Geoff’s family first homesteaded here in 1861. Geoff has remained tightly tied to the island and its beauty his entire life. He made San Juan his full time home starting in 1975 when he built his first home.

After starting an architectural practice in Seattle in the late 1980s, he now splits his time between the San Juans and Seattle. Geoff spends about 50% of his time at his cabin on San Juan, which sits on a piece of land his grandfather bought in 1918, surrounded by family.

Here’s an official press release about the merger:

Geoffrey Prentiss and Tom Lenchek – respective principals of Prentiss Wickline Architecture and Balance Associates Architects – today announced the merger of their two firms to launch Prentiss + Balance + Wickline. Long time Prentiss partner, Dan Wickline, will serve as the principal of the newly merged firm, which will have its headquarters in Seattle. Terms of the private merger are not disclosed.

Collectively, the two firms have amassed more than 50-years of award winning experience in business, an impressive staff of architects and designers, and have had their commercial and residential designed projects featured on broadcast and print media nationwide.

“The merger allows us to fill gaps each firm had and expand our individual networks tocover the nation,” said Prentiss + Balance + Wickline principal, Dan Wickline. “Our design style, corporate culture, and approach to the future are in such lockstep the transition has been seamless. This merger allows us to accelerate growth, but more importantly allows us to deepen our skill sets and insights, providing our clients more expertise.”

Both firms design with balance between natural and built environments, a client’s vision and real world parameters, and ultimately between beauty and utility.

The newly merged firm already has more than 40 projects underway and is combining new tools and insights to allow for greater efficiencies and design perspectives.

About Prentiss + Balance + Wickline
Based in Seattle, Prentiss + Balance + Wickline is an award-winning architecture firm with its roots firmly planted in the Pacific Northwest and emphasizingwarm, modern design. The firm has designed residential and commercial projects nationwide that have won the acclaim of The American Institute of Architects and other prominent industry awards, and media outlets such as LUXE and DWELL Magazine.