This just in from Island Stage Left… 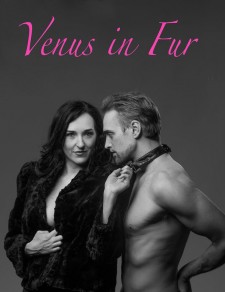 “Venus in Fur” opens tonight (Thursday April 7th) at 7:30. The buzz is around town and seats will be full. Don’t miss out on the excitement! We’re looking forward to seeing you there!

John Langs, the Artistic Director of ACT in Seattle, has been directing Island Stage Left’s two-person cast in Seattle, and now they are ready for you! We open this Tony award-winning, provocative, smart and funny play, “Venus in Fur” by David Ives, at the SJC Fairgrounds on April 7th. We’re very excited as this represents another move forward for ISL and will showcase our two Associate Artistic Directors for this season, Ty and Cassandra Boice.

A young playwright, Thomas, has written an adaptation of the 1870 novel Venus in Fur by Leopold von Sacher-Masoch (origin of the term “masochism”); At the end of a long day in which the actresses Thomas auditions fail to impress him, in walks Vanda, very late and seemingly clueless, but she convinces him to give her a chance. As they perform scenes the lines between writer, actor, director, and character begin to blur.

An exploration of gender roles and sexuality, Venus in Fur is also a witty and unsettling look at the art of acting—onstage and off. For full schedule and showtimes, visit IslandStageLeft.org.