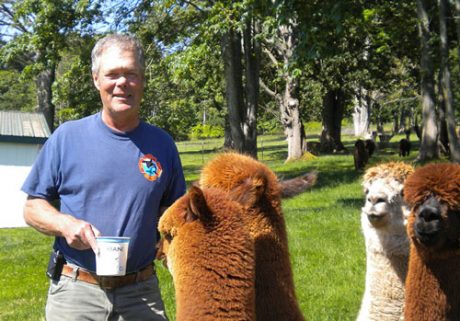 To protect life and property

Albert and his wife, Kris, own and operate Krystal Acres alpaca farm on Blazing Tree Rd off West Valley Rd.

He is also a Tender Operator/Engineer assigned to Station 36 ( Eagle Crest) where he has served for 6 years. Previously he was assigned to Station 34 (Sunset Point). Albert retired from actually fighting fires when he turned 65. Tender Operator/Engineer is a position that was developed so that firefighters who have served as firefighter and are past retirement age can still participate. They are qualified to drive and operate the water truck and a fire engine during a fire. This allows the firefighters to fight fires rather than worrying if they will have enough water to do so.

Albert was born and raised in a farming family on Fir Island, Washington which is bounded by the North and South forks of the Skagit River. His family were dairy and crop farmers. He attended Mt. Vernon High School, attended business school in Seattle for a year, then went to work for Pacific National Bank in Seattle. He met and married his wife Kris 1965. Since he was a farm boy at heart, he and Kris moved back to the country to Camano Island and purchased a Napa Auto Parts store in Stanwood, WA. He sold the store in 2002. After that he settled on San Juan Island permanently.

Albert started volunteering for the San Juan Island Fire & Rescue in 1997 at station 34 (Sunset Point). Although he was not yet a full time resident of the Island, Albert was able to fulfill his duties as a firefighter on a part-time basis. He was appointed to the Board of Commissioners of the Fire Department in 1998 on which he is still serving after 18 years.

One of Albert’s goals in life was to get the new station on Mullis street built because once that was completed, he hoped that the Town Fire Department and the District Fire Department would then be able to combine and be under one command. The new station was built in 2000 and that hope was accomplished.

Albert says, “After retirement what would I have been doing if not volunteering with the fire department? I have been doing it so long! I think I am very knowledgeable, I get along with all the firefighters, they know that they can come to me and I will follow through. I love to serve the public. I’ve been on a fair amount of fire calls and bad accident assists. People have lost their homes and I have helped pick up the pieces. The fire department is a group of people of all different personalities and from different walks of life. It is interesting to be around them and work with them.”

San Juan Island Fire & Rescue welcomes all interested men and women ages 16 years and above to drop by the Mullis Street Station and make an appointment to see what we are all about. Look online at www.sjifire.org for lots of good information. Or, you could view our Facebook page: San Juan Island Fire & Rescue. Our phone  is (360) 378-5334. We would be pleased to talk with you.