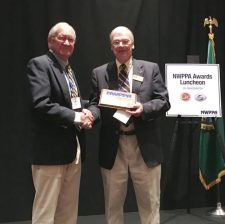 At the 2016 Annual Membership Meeting of the Northwest Public Power Association (NWPPA), Bob Myhr was presented with the NWPPA Life Member Award. Myhr retired from the OPALCO Board of Directors in 2015 after nearly 30 years of service.

Myhr was an advocate for safe, reliable, cost-effective electricity; energy efficiency and conservation; local generation of renewable energy; new technologies to manage power; and the fiber-optic network. In addition to his service to OPALCO, Myhr has also served as executive director for the San Juan Preservation Trust and the San Juan County Council.

General Manager Foster Hildreth said, “I personally thank Bob Myhr for all he has done in service to OPALCO, the co-op membership and our island communities.” Hildreth was present at the award ceremony.