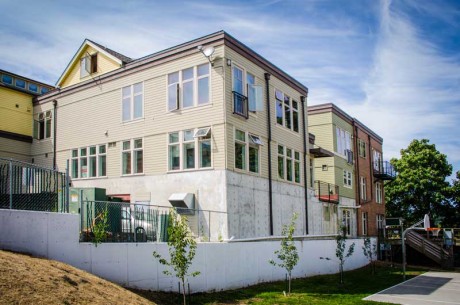 The Town of Friday Harbor invites the public to view the installation of a mural in Sunken Park beginning May 13th. A celebration of the completed work will be held at 2 pm Sunday, May 22nd, and will include chamber music courtesy of Sue Collado, Sasha von Dassow, Hanneke Klein-Robbenhaar, and Traci Wilson, and a reading by the winner of the Friday Harbor Arts Commission (FHAC) Sunken Park poetry contest.

Kirkland artist Jake Wagoner’s work was selected from several proposals submitted by professional local and northwest artists. In an October 2015 statement to the Town Council, the FHAC said they found Wagoner’s piece, “Witness the Beauty”, both sophisticated and intriguing, and that his subject choice of the waxwing bird as an indigenous but not over-represented animal was unexpected and appropriate for the park setting.

The mural selection process included a review by an Art Selection Panel (ASP) composed of representatives of the Arts Commission, local art community, and neighbors of Sunken Park. According to the Arts Commission, the panel members expressed appreciation for the experience and skill of all of the artists and for the degree of research and careful thought that went into each of their concepts. The ASP independently reviewed the proposals then came to a consensus. The selection was discussed publicly at FHAC and Town Council meetings in late 2015. “Public input was critical to our art selection process,” said Arts Commissioner Debbie Pigman, adding, “The commission wants the selection and installation of our projects to be an exciting and memorable process for the community.”

This is the first public art project for the FHAC which was formed in 2015 to advise the Town Council on the cultivation, selection, acquisition, and placement of public art. The commission was asked by the Council to pursue mural art for Sunken Park as part of ongoing revitalization of the park that has included new landscaping, fencing, boardwalk, and playground equipment as well as refurbishment of the benches and basketball court. Additional improvements are planned for the near future.