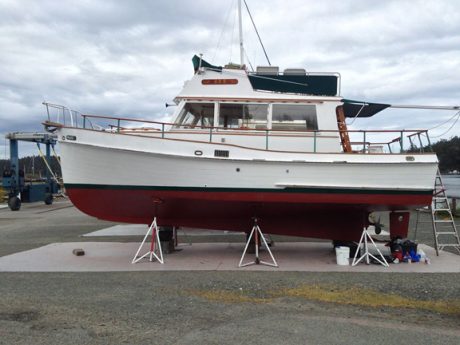 The Bee, Cleaned Up and Ready to Launch – Greg Hertel Photo

From the Washington State Recreation and Conservation office…

OLYMPIA – As summer weather heats up in Washington and boaters prepare for more adventures on the water, the Washington Invasive Species Council would like you to remember: Clean. Drain. Dry.

Invasive species are non-native animals, plants, microorganisms and pathogens that can out-compete or prey on Washington’s existing wildlife, harming the environment, human health and businesses. They come to Washington on car tires, on boat hulls and motors, on hikers’ boots, by wind and sea and many other ways. Some of the worst live in the water.

“There are many ways that we accidentally introduce and move invasive species from one waterway to another,” said Justin Bush, executive coordinator of the Washington State Invasive Species Council. “The best way to prevent introductions is to remember the mantra ‘Clean-Drain-Dry.’

It’s also the law. It is illegal to transport or spread aquatic invasive species and violators can face a maximum penalty of 1 year in jail and $5,000 in fines. To avoid fines, potential jail time, and harming Washington’s waters, follow the “Clean-Drain-Dry” methodology.

Clean: When leaving the water, clean all equipment that touched the water by removing all visible plants, algae, animals and mud. This includes watercraft hulls, trailers, shoes, waders, life vests, engines and other gear.

Drain: Drain any accumulated water from watercraft or gear, including live wells and transom wells, before leaving the access point to the water.

Dry: Once you get home, let all gear fully dry before using it in a different water body.

If transporting watercraft from outside of Washington State, the “Clean-Drain-Dry” method may not sufficiently remove some invasive species.

In this case, the council recommends that you call the state’s aquatic invasive species hotline (1-888-WDFW-AIS) managed by the Washington Department of Fish and Wildlife. Be prepared to provide the state and water body where your watercraft was used and whether you decontaminated your watercraft before you left that state. In certain conditions, the State will require a free intensive decontamination upon entry into Washington.

“Many of the worst aquatic invasive species are not yet found in Washington and your vigilance will keep it that way,” Bush said. “’Clean-Drain-Dry’ will not only eliminate invasive animal species, but prevent introduction and movement of invasive diseases, plants and insects.

Finally, remember a second mantra: “Don’t Let it Loose.” Dumping bait can introduce some invasive species to waterways. Dispose of all unused bait in a trash can instead of dumping it back into the water or on the shore.

“Your diligence will protect Washington’s water resources from invasive species and ensure that future Washingtonians can experience the same water activities that you enjoy,” Bush said.

If you suspect you have an invasive plant, fish, mollusk or crustacean, please report it to the Washington Invasive Species Council using the online form or the WA Invasives smartphone app, available atwww.invasivespecies.wa.gov/report.shtml.

The Invasive Species Council, established by the Legislature in 2006, provides policy level direction, planning, and coordination to combat and prevent harmful invasive species throughout the state. To learn more about how you can prevent the spread of damaging invasive species, visit the council’s Web site athttp://wise.wa.gov/.