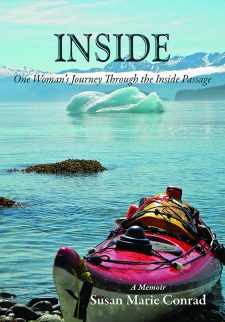 Inside: One Woman’s Kayak Journey Through the Inside Passage

Kayakers, sailors, adventurers, and those who’ve journeyed along the Inside Passage to Alaska should make sure to attend Susan Conrad’s book talk and slide show at the Library on Wednesday night, July 27, 7:00 pm. You’re sure to be inspired.

INSIDE: One Woman’s Journey Through the Inside Passage is a plucky adventure memoir about a woman in a small boat on a big adventure along the coast of western North America. It’s the story of a physical and emotional odyssey through an alluring, perilous, and healing coastal landscape. It’s also a story about confronting fears, solitude, crushing exhaustion—and grief.

Susan Conrad shares the magic of this beautiful coastline, along with her challenges and triumphs, experienced from the cockpit of an 18-foot sea kayak. On the way, she paddled marathon distances for weeks on end, forged friendships with quirky people in the strangest of places, and pretended not to be intimidated by 700-pound grizzly bears and 40-ton whales. In doing so, she imparts a stronger connection to the natural environment and motivates folks not only to explore it, but to cherish and protect it. Whether she’s floating in a magical world among whales and icebergs, or paddling wildly with fear at her back, she take readers along for the ride and inspires them to take chances, pursue their dreams, find their own truths, and realize their full potential.

“Susan Conrad writes of the things that make solo sea kayaking challenging, rewarding and life changing. The tides are not always in her favor and the crossings are not all sun drenched and paddled with ease or certainty. At times her fatigue is as palpable as the taste of salt from tears or sea spray or both. When Susan reaches her goal, the reader will understand there is so much more to a solo endeavor than the physical act of paddling 1,100 miles.”

About the Author: Susan Marie Conrad grew up on a small farm near Woodbourne in upstate New York. By dint of exploring the mountains of Colorado, Oregon, and Montana, she eventually discovered the dynamic and addictive environment of coastal British Columbia and Washington State, where she thrives as an adventure-seeker. Susan is a writer, photographer, personal trainer, kayak instructor, and outdoor enthusiast. Her combined passions have lead to publication in many magazines, newspapers, guidebooks. She lives with her second-half-of-life partner, along with a ridiculously large dog and two normal-sized cats in Oso, Washington.