Many of you know Mike Vouri from his work with the Island’s National Historical Parks if not from his books on local history or his dramatic portrayal of Captain George Pickett. Vouri now has an essay about the U.S. Coast Survey Steamer Active up on HistoryLink, a free online Encyclopedia of Washington State History. Says Vouri, “The painting by James McMurtrey is of the Active (the sidewheeler at right) and HMS Satellite on Bellingham Bay, c.1858.” 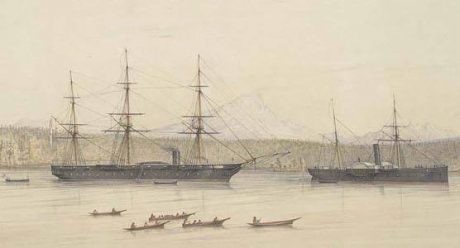