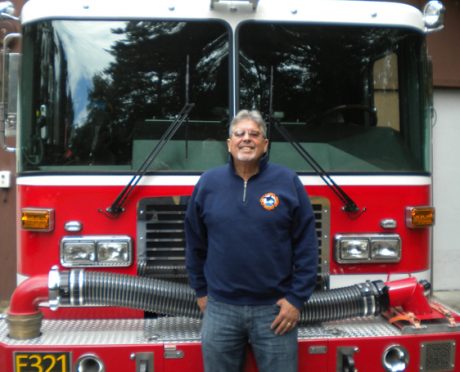 Firefighter Dan Tracy finally settled at the South end of San Juan Island in 1998 with his wife Sandie. Their two children were already grown and on their own.

Dan received his Masters Degree from San Jose State College and Naval Postgraduate School in California and was well aware of  San Juan Island because he was a Commissioned Officer and physical oceanographer scientist for NOAA (National Oceanic and Atmospheric Administration) who’s job consisted of taking readings of the tide flow in the area of Puget Sound, contributing to the development of the Tide and Current Tables  that so many Islanders use on a regular basis.

After working for NOAA for 21 years Dan retired in 1993. He worked as a Captain for the Washington State Ferry System for 11 years, working temporary assignments on the Interisland ferry route. “When the weather was good”, he said,” I had the best office view in town!”.  ” In the fog it was a challenge; and surprising when you break out into clear skies and see 10 small boats following the ferry.”.

He built their house on Cattle Point then Dan joined San Juan Island Fire & Rescue in 2000.  At present he is the only firefighter who lives south of Portland Fair Road and is assigned to Station 32 at Cape San Juan.  He says he joined the fire department because his house is under trees and its nice to know how to use local resources, he’s an adrenalin junkie, and being a firefighter is good for his community.  He is also the point man at Cattle Point Estates for the fire department’s Fire Wise program.

Dan uses his nautical skills by volunteering two months each year on the AFRICA MERCY hospital ship providing free care to those in need in West Africa and Madagascar.

He enjoys the comradery of the firefighters. He feels that the job is pretty exciting because they all face challenges together, eat together, and have the Firefighters Association working for them.  They learn together and are able to respond to crises that are both wildland and structural fires.  He says that fighting fires is challenging, but once a person can demonstrate the skills needed, she/he can be very productive.  One can go to the scene of a fire and work with a team to save a structure or prevent a big wildland fire from getting worse.  One can join the search and rescue team, or go off Island to help others fight fires for the Bureau of Land Management, and in the meantime, learn so much of the way big departments do things and bring that information home to San Juan Island.

He really enjoys being a part of San Jan Island Fire and Rescue!  And would really like to see more recruits come from the people who live south of Portland Fair.

San Juan Island Fire & Rescue welcomes all interested men and women ages 16 years and above to drop by the Mullis Street Station and make an appointment to see what we are all about.  Look online at www.sjifire.org for lots of good information.  Or, you could view our Facebook page: San Juan Island Fire & Rescue.  Our phone # is (360) 378-5334.  We would be pleased to talk with you.