If anything, our market has been extremely consistent since 2014 with higher priced properties being sold, which is partly due to the low inventory levels for homes listed below $400,000.

Sales in excess over $1 M total 17 year-to-date in the County with San Juan enjoying 9, Orcas with 4, and Lopez and Shaw with 2 each. As in the case of total dollar volume, the total of high-end sales is very similar to 2015 and 2014 for the same period.   Currently 11 high-end sales are pending in the NWMLS for the County which is very similar to the number in 2015. Literally, we could have just re-issued the June 30, 2015 real estate market update but we suspected as a reader, you may have noticed. 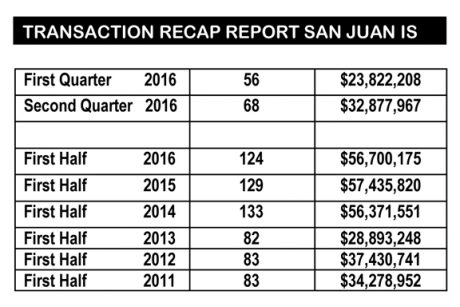 As indicated by the chart above, inventory has been status quo in June of each of the last few years. The number of pending sales is also very similar and the ratio for the number of pending to number of listed properties has improved since 2014. This steady increase in pending activity will place absorption pressure on the current inventory and future inventory is not originating as it has in the past. In 2015 between May and June, 74 residential home listings were originated, in 2016, same period, only 43 were originated.

Based on all of the indicators, the closing volume should be primed to move upward.

As agents, we all have numerous buyers currently viewing properties and the amount of showings on each of our residential home listings is above normal. Based on the ratio of showings to contracts, it is still apparent that many buyers feel they have the luxury to wait longer for the “perfect” property.

As agents, we are on the front line and we are noting the transition in many of the pricing segments of our market changing. Inventory under $400,000 is extremely tight and high-end sales continue to increase.

Our advice to buyers is not to wait too much longer if you hope to purchase before prices start to increase. We generally feel that based on the statistical data, now is a good time to buy.

As I mentioned above, our agents are working with numerous buyers and our listings are very active with showings. We are fortunate as Coldwell Banker San Juan Islands Inc. is enjoying a 21% increase in dollar volume year-to-date even though the San Juan Island real estate market dollar volume is very similar to last year same period. 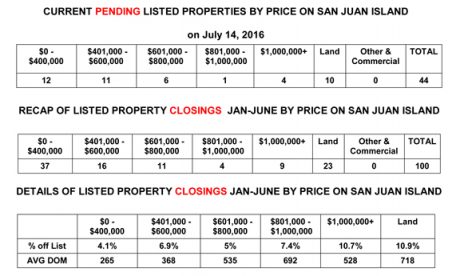 We are sure you have noticed the days on market is rather lengthy in some price range categories but that is an average which includes a number properties that were on the market for 5-7 years and have finally sold.